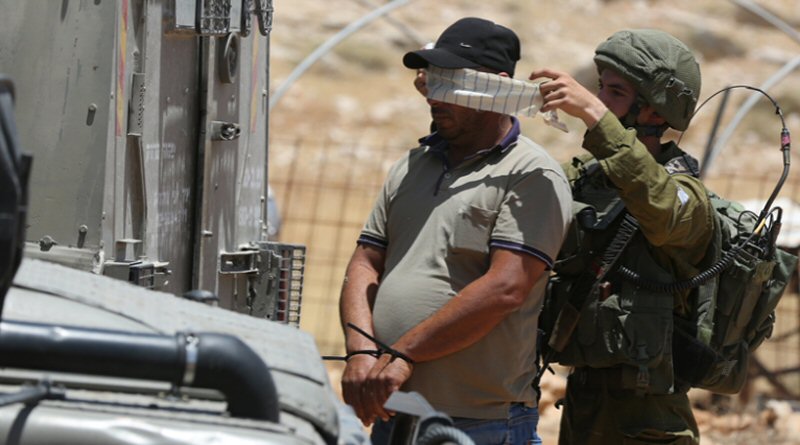 Israeli occupation forces and settlers continue to commit human rights violations against Palestinians in the West Bank district of Hebron.

On June 2, Israeli soldiers shot and killed Rami Waheed Sabarna, 37 years old, claiming he attempted to run over soldiers with a truck in downtown Hebron. Sabarna, a 37-year-old husband and father from Beit Ommar, was driving a tractor as part of his job as a construction worker when he was killed. Human rights activist Aref Jaber witnessed the execution and filmed its aftermath. Jaber told Ma’an News: “Sabarneh was driving a Bobcat tractor while another worker walked next to him. Israeli soldiers asked them to stop when he was at least 10 meters away from them. The walking worker stopped, but Sabarneh apparently did not hear the soldiers and continued… so they opened fire at him until he was killed.” Sabarna’s family also refutes the Israeli military’s accusation and demands an independent investigation into the circumstances of his death.

After filming the execution of Sabarna, Israeli soldiers accosted Jaber, threatened his life and attempted to confiscate his cellphone, reports the International Solidarity Movement. That night, soldiers also raided Jaber’s home and physically assaulted him and his wife. Jaber’s home is frequently raided by the Israeli military. On June 23, his home was raided yet again and soldiers arrested his 16-year-old son.

On June 4, settlers invaded a Palestinian home on al-Sahla Street in downtown Hebron. They pitched an Israeli flag on its roof, brought in building materials, and damaged doors and windows. The home belongs to the Qudsi and Kurdi families and is one of the oldest buildings in the area. Rafiq al-Qudsi, an owner of the house, explained after the raid: “We submitted all of the required documents to the court in 2001 [to prove ownership,] but [Israeli authorities] have still not arrived at a decision. For ten years, the settlers have tried to take over my home.” Al-Qudsi reported the following week that though the settlers were gone, Israeli soldiers had turned his home into a military base. The army claims it will evacuate the home once military exercises are finished.

The Qudsi and Kurdi home in Hebron. Photo credit: WAFA.

On June 4, Israeli soldiers invaded Wadi Husain, east of Hebron’s downtown. Soldiers stopped people in the street, checked their IDs and raided nearby homes. They arrested Samir Husain, eight years old, and his father. Both were taken to an Israeli police station where they were held for two hours.

On June 4, a group of about ten settlers with the protection of Israeli soldiers threw stones at Palestinians homes in the Tel Rumiada neighborhood of Hebron city. The settlers physically assaulted Human Rights Defenders Coordinator Imad Abu Shamsiyya when he started documenting the event. They also tried to confiscate his cellphone.

On al-Shuhada Street in downtown Hebron on June 7, Israeli soldiers trapped a Palestinian family inside of their home. The soldiers welded shut the front door of the Zahida family’s home and ordered them to evacuate the property within 24 hours, though they did not present an eviction order. On June 10, after the eviction was postponed, Israeli soldiers raided the Zahida family’s home again. This time, they knocked down an adjacent wall into a neighboring home to create a rear exit for the family, before welding the front door shut again. At least two Palestinians, including a pregnant woman, were injured during the raid and Palestinian medical personnel had a difficult time reaching them due to Israeli checkpoints. Coordinator of the Hebron Rights Defenders in Hebron Imad Abu Samsieh says the Israeli soldiers have been attempting to force the Zahida family out of the home since they moved in a month ago.

A woman looks out of a door welded shut by the Israeli military in downtown Hebron, June 10, 2018. Photo credit: Christian Peacemaker Teams.

On June 9, Israeli soldiers arrested Ali Ayyad Awad and his wife Amina Hamid Awad while they were working on the their land in Kahlit el-Kotla, an area near the town of Beit Ommar and Karmei Tzur settlement. Soldiers claimed that they need permission from Israeli authorities to work their land. When Ali Awad refused to leave, soldiers arrested him and his wife and detained them for two hours.

On June 12, soldiers arrested Youth Against Settlements activist Mohammed al-Zughayyar, 30 years old. Zughayyar was arrested in Tel Rumeida while he was distributing food to local families. The soldiers released him after a few hours with orders to not enter the area again.

On June 20, Israeli soldiers shot into a Palestinian car near the Gush Etzion settlement block, north of Hebron city. Ahmad Nassar Thawabtah, 27 years old, was transferred to a hospital for treatment for a bullet wound in his back. Israeli forces then closed the roads leading to the towns of Beit Fajjar, Taqou and Um Salmoneh.

On June 23, Israeli forces arrested multiple journalists and activists in Bani Naim during a protest against the Israeli military’s plan to confiscate part of the town’s land. According to The Palestinian News and Info Agency (WAFA), WAFA photographer Mashhour Wahwah, Palestine TV correspondent Azmi Banat, Director of the Anti-Settlements and Wall Committee for the southern West Bank Younis Arar, along with two members of the Bani Naim municipal council and one member of the Hebron municipality were arrested.

On June 24, Israeli settlers with military protection set up a makeshift wooden bus stop on Palestinian land in Tel Rumeida.

On June 25, the Israeli army closed a military gate that controls Palestinian movement through the Beit Einun junction, north of Hebron, for two days. The closure isolated around 35,000 Palestinians living in the towns of Sa’ir and el-Shoyoukh.

Israeli soldiers attacked Palestinians attending a memorial for the death of Saber Hureini, former head of the a-Tuwani local council, in the South Hebron Hills on June 30. They physically assaulted attendees, aimed guns at the group, and violently arrested a young Palestinian boy.

Over the last week of June, Israeli soldiers raided most of the Palestinian homes in the Israeli occupied part of downtown Hebron, known as H2. The incursions took place in the middle of the night. During the raids, soldiers closed all roads that link the area to other parts of the city and stopped and frisked residents, mostly young men. Around 20 youth were arrested. Locals described the raid as a targeted military campaign against the H2 area. Human Rights Defenders activist Badee Dwaik states that there was no apparent reason for the series of raids.