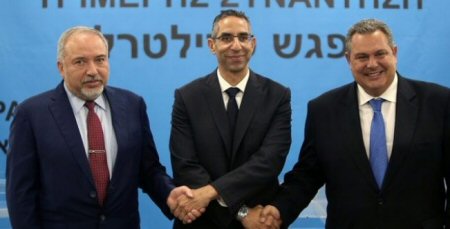 Plans for a Gaza seaport in Cyprus, policed by Israel, were discussed as Defense Minister for Israel, Avigdor Lieberman, met with his Cypriot and Greek counterparts, on Friday. The offer is conditional upon Hamas’ release of Israeli prisoners and remains of Israeli soldiers, with no mention of the 6036 Palestinian political prisoners or 310 Gazans alone that Israel currently holds.

The plan, according to the PNN, would supposedly help part of a US-led plan to ‘improve the humanitarian situation in Gaza’ with aid from the port. This aid is also conditional on Hamas’ acceptance of America’s demands for the ‘peace deal’. Leading Fateh members have already condemned the US “peace plan” as a ploy to create division between Gaza and the West Bank.

Many see Lieberman’s latest offer of a seaport as yet another political tool, and Israeli officials have been quite transparent about their motives. In an interview on Monday, a senior security official revealed that “The moment that all the details are settled and everything is locked and loaded, we will directly turn to the public in Gaza, going above the head of Hamas, and we will put the benefits package on the table in the open and tell them—this is possible, this is the price. Take it or leave it.” It is clear that the deal is an attempt to undermine Hamas’ support.

There is certainly mistrust of the integrity of Lieberman’s supposed concern for the humanitarian situation in Gaza. After the massacre of 30 Gazans in April, by Israeli forces, he stated that “there are no innocent people in Gaza,” and he has previously boasted of the lengths he would go to to defeat Gaza, saying, “If a quarter of the [Gaza] Strip is needed, then we occupy a quarter of the Strip. If more, then more,” and claiming that the next war with Gaza will be the ‘last’.

The talks also coincide with joint Cyprus-Israel-Greece plans to work together for “security” in the Mediterranean, against illegal immigration and what Leiberman calls “rogue states”. Israel and Cyprus are also keen to explore newly found gas reserves off their coasts.

Many are also suspicious of the Trump administration’s claims of concern about the humanitarian situation in Gaza. Earlier this year, the US cut the budget for the UNRWA, leading NGO supporting Palestinian refugees, by fifty percent, as well as aid to the PA. In a tweet, Trump justified this, saying “We pay the Palestinians HUNDREDS OF MILLIONS OF DOLLARS a year and get no appreciation or respect… but with the Palestinians no longer willing to talk peace, why should we make any of these massive future payments to them?”