Life Under Siege: A Girl’s Struggle After The War 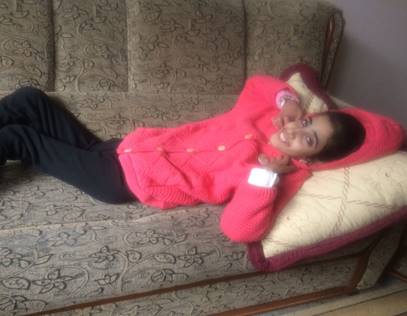 Between the 19th and 20th of July 2014, the Shuja’eyya neighborhood – one of the most densely populated areas located in the northern part of the Gaza Strip, east of Gaza city – was exposed to Israeli airstrikes in an unprecedented way, which led to the destruction of the entire area and its infrastructure. Looking as if it had been hit by an earthquake, the attack left more than 1949 residential buildings completely destroyed. The arbitrary intense bombing led to 195 civilian casualties, of which 50 were women and 55 children.  Furthermore, the 180 children became disabled as a result of this war. A whole new generation of children has grown up knowing nothing but war.

Among them is Maha al Sheikh Khalil, a ten-year-old girl who survived the attack. Despite the challenges and hardships she has been through, Maha is full of love, and hope. Maha’s childhood memoirs are afflicted with loss, war, and being left with irreparable injuries. Maha suffers from quadriplegia after having caught shrapnel in the neck, resulting in vertebrae spinal fracture.

Alerted by explosions outside, on al Beltaji street, where the Sheikh Khalil family has their home, the 16 family members split up into two groups, half of them hiding under the staircase and another above. In addition, a man seeking for a place to hide from the chaotic scenes on the street hid in the family’s house. The house was attacked by at least five or six mortars, which led to the death of seven family members, and the severe injury of three children, Fatma (9), Ziad (11) and Maha (7). Fatma’s mouth was hit by a shrapnel, which broke her lower jaw. Ziad’s leg and head were hit by a shrapnel as well – the one hitting his head is still until the present day. It was an arbitrary attack targeting civilians, as the family had never been involved in any kind of political resistance.

The physical and psychological impact that 20th of July 2014 had on the Sheikh Khalil family is indescribable. “We miss our old us. We were something before and now we are something else”, the oldest sister, Zeinab, describes. Having lost their mother, Zeinab took over the mother role at the young age of 18, to take care of her five siblings who survived the attack. At the same time, she managed to become a talented and successful arts student at university.

Maha was first treated at Gaza’s al-Shifa hospital for 30 days, due to the limited medical care facilities; her case was perceived as a lost one. The doctors gave prioritized injured persons with higher likelihood of recovery over severe cases like Maha. “Nothing broke my heart as much as seeing her unable to move her arms and legs”, her father, Hamad, describes in tears. A promise to be treated in Germany was not kept and with the perspective of getting proper treatment for his daughter in Europe. When staff working for the Turkish government came to visit the family, they were shocked by Maha’s presence and took her to Turkey, where she was treated for ten months. As Hamad was unable to accompany his daughter because of his responsibility for her siblings, another relative stayed with Maha in Turkey, for the first three months. After seven more months of staying alone in a hospital in a foreign country, at the age of seven, Maha demanded to go back to Gaza to be with her family. Her prognosis, upon leaving Turkey, was that she will never be able to fully recover from her injuries.

Maha has been back in Gaza for a year and a half, and is completely dependent on physiotherapy. Due to her medical condition, she lost her appetite, suffers from high fevers during winter times, and missed the first semester of school this year due to her bad immune system. To improve the state of her quadriplegia, she should receive physiotherapy four times per day for 40 NIS each for the rest of her life. But, the costs of treatment are too high for the family to cover, so she only has one therapy session per day. Despite everything she has been through, she has grown into a tough young girl, who is trying her best not to reveal in front of other kids that she feels different than them. When playing with others, she always takes the role of the leader. When her health allows, she attends Shams el-Amal school for disabled kids, which runs until the sixth grade. It is yet unclear whether she will be able to continue her education after that. Before being injured, she wanted to become a doctor to treat the injured, but with the tragic experiences of 2014 made her dream seems unreachable. Until the present day, Maha and her siblings are in a constant state of fear of another attack, and losing more family members.