London Cyclists Ride in Support of Palestinian Cause 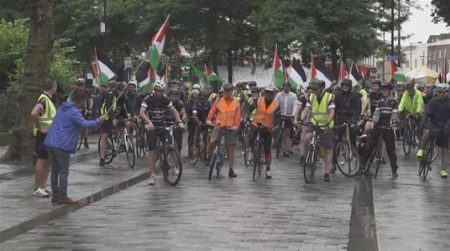 Several hundred cyclists have taken to the streets of London to protest the Israeli-Palestinian conflict, and to raise money for a Palestinian charity.

The ride has been an annual event in London since 2015. They’re gathering to ride 36 miles across the city, bearing Palestinian flags and ringing their bike bells as they go, PNN reports.

The annual “Big Ride for Palestine” attracts Londoners from all walks of life. Now in its fourth year, the ride is both an act of protest and a fundraiser.

Before hopping on their bikes, the riders hear speeches from activists and volunteers. One of the speakers is Palestinian national football team player Mahmoud Sarsak, who went on a three-month hunger strike while being detained by Israeli authorities.

“(It is) my dream, to take this ride one day to start from Rafah to end in the north of Palestine in Acre, with raising our Palestinian flag to show the people that we still have hope,” he tells the crowd.

The riders take a circuitous route, starting in North Kensington and roaming through north and central London to Bethnal Green in the city’s east.

In Bethnal Green, the riders dismount and gather on the steps of St John on Bethnal Green church. They shout slogans and hold banners to raise awareness of the Israeli-Palestinian conflict.

Since the Big Ride started it has raised more than £130,000 (161,000 US dollars) for Palestinian charities. Organizers say this year the crowd was double the size of last year’s, and think they may have raised a record amount.

Human Interest 07/23/19 Gaza Revived: How An Irishman Is Giving Hope To Palestinian Amputees