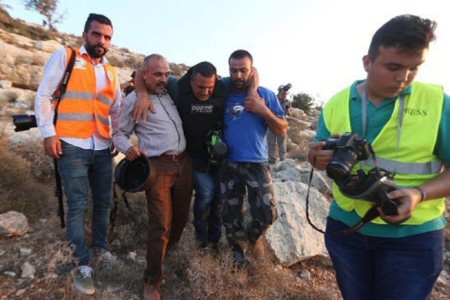 (photo: Issam Al-Rimawi, photographer of the AFP after being injured by a rubber-coated bullet in Ras Karkar, PNN)

September of 2018 has witnessed a rise in the number of violations committed against media freedoms in Palestine, compared to those committed in the previous month of August. During September, the Palestinian Center for Development & Media Freedoms “MADA” has monitored a total of 48 attacks committed against media freedoms in Palestine, 39 of which were committed by the Israeli Occupation while various Palestinian authorities in the West Bank and Gaza Strip have committed a total of six violations. It should be noted that the preceding month, August has registered 46 attacks.

The Israeli occupation has committed most of the attacks against media freedoms registered in September totaled to 39 attacks, while various Palestinian authorities in the West Bank and Gaza Strip have committed a total of nine attacks.

Most of the attacks over September, especially those committed by the Israeli occupation, were registered as the most serious attacks against the lives of journalists and media freedoms.

During September 2018, Israeli forces have committed 39 attacks against media freedoms in Palestine, which is a greater number of Israeli attacks compared to those committed during August (totaled to 35 attacks). It should be noted that most of the Israeli violations during both months fall under the serious physical attacks against the lives and jobs of journalists.

Most of the 39 Israeli attacks fall under the extremely serious types of attacks. It is worthy to mention that 25 of these attacks were mostly physical injuries inflicted upon both female and male journalists while they covered field events in the occupied West Bank and Gaza Strip; sixteen of these injuries were caused by live, explosive, and rubber bullets, as well as gas bombs fired directly at the bodies of the journalists.

The number of Palestinian violations has dropped slightly from eleven attacks committed during August to nine committed during September. Three of which were committed in Gaza Strip while nine in the West Bank. These attacks included: issuing subpoenas by the Public Prosecution Office in Khan Younes, Gaza Strip, against three Palestine TV staff members — namely: the Director of Palestine TV in Gaza Strip, Rafat Hammad Abdelmajeed Al-Qidra, the producer, Yousef Mohammad Ahmad Abu Maghsib, and the journalist, Momen Al-Shobaki — to complete their investigation against the backdrop of broadcasting a report on 22ndAugust 2018 about a child named Mohammad Abu Anza from Absan, who was extremely beaten by some of Hamas members in Gaza Strip; the arrest of the television presenter of Marah Radio in Hebron and the reporter of the British Newspaper “Arab Weekly”, Mohammad Saed Khalil Jahaysha, in front of his house, by Palestinian intelligence officers; as well as the arrest of the journalist of Al-Hadath Newspaper, Musab Abdelsamad Shawer Al-Tamimi, (27 years old), from Hebron, after being summoned via phone; invading the headquarters of the photographic studio of the freelance photographer, Nidal Mahmoud Al-Natsheh in Hebron by a force of the Palestinian Intelligence Services; and the summoning of freelance journalist, Musab Khamees Qufaisha, by Palestinian Intelligence Services, to force him to shut down and delete a newsgroup; this in addition to summoning journalist Thaer Ziad Al-Fakhouri, by the Palestinian Intelligence Services, and questioning him.