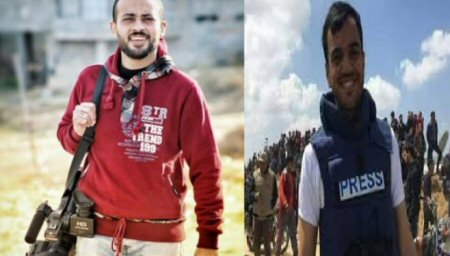 The Palestinian Center for Development & Media Freedoms (MADA) has issued a special report on Israeli attacks targeting both male and female journalists, during their coverage of the Great March of Return protests that erupted eight months ago. It should be noted that these demonstrations mostly take place in five key areas near the barrier fence, in the Gaza Strip, to protest the continuing siege.

The report documents the grave and broad Israeli attacks witnessed during the marches in the first six months (between March 30, 2018 and September 30, 2018), committed against media freedoms. These attacks reflect the adoption, by the Israeli occupation, of an official policy based on excluding and impeding the media from covering the events and preventing journalists from transmitting an accurate picture in various ways. Such ways have even included murder, as the report indicates, according to the PNN, demonstrating the statement of former Israeli Defense Minister Avigdor Lieberman, in commenting on the killing of the journalist Yasser Murtaja, by the Israeli Army, which reflect the explicit call to target journalists with murder. As Lieberman, in this regard, has stated to the Israeli newspaper Haaretz, on 8 April 2018, “I do not know who he is (referring to the journalist, Murtaja), whether he was a photographer or not. Whoever turns on a drone (a small aircraft for aerial photography) above the Israeli army forces should know that he is risking his life” even though Murtaja was 300 meters away from the separating fence where the soldiers were deployed.

During the six months covered by the report, the killing of two journalists, Yasser Murtaja and Ahmad Abu Hussein, by explosive bullets fired by the occupation soldiers while the men were covering the events of the return marches, during April, is documented in the report. This is in addition to the injury of 46 male and female journalists, by live and explosive bullets, resulting in serious injuries, and impeding the journalists, for reasonable periods, from covering the events or fulfilling their journalistic duties, even though all of them were wearing visible “Press” signs. Furthermore, most of these men and women were injured while standing between 300-350 meters away from the separating fence.

In addition to these injuries by live bullets, the report also documents the injuries of a total of 25 journalists by gas bombs fired directly at their bodies, resulting in serious injuries. The report considered this additional evidence to the deliberate targeting of journalists by the occupation army, pointing out an extended history of the repression and targeting of media freedoms in Palestine, the most serious of which was the killing of 17 journalists and media workers in less than two months, during the war launched on the Gaza Strip in 2014, by the Israeli army.

MADA renewed its call of forming an independent commission to investigate the crimes of the Israeli occupation against the media freedoms in Palestine, particularly the murders of the journalists Yasser Murtaja and Ahmad Abu Hussein, and all other crimes of occupation against journalists. The report also considers that the widespread Israeli crimes against journalists and the media, and their continuous escalation in quantity and quality, is a direct result of the impunity of soldiers and officers of the Israeli occupation army for the crimes which have been committed during the past years.

This requires the various international and official agencies to pursue the perpetrators for all of these crimes, to bring them to justice and put an end to acts of impunity, which is a direct catalyst for the continuation and escalation of Israeli attacks on journalists and the media in Palestine.