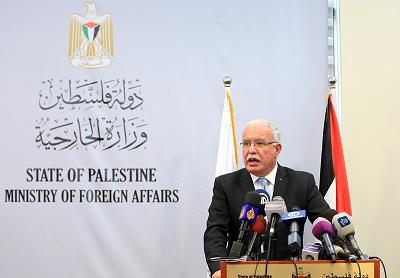 Palestinian Foreign Minister, Dr. Riyad al-Maliki, has reportedly refuted UNESCO Director-General’s comments on the last resolution adopted by  the Executive Board of the organization, with regard to the state of affairs in Jerusalem.

In a press statement sent by the Ministry of Foreign affairs Dr. al-Maliki stated, today, according to the PNN:

”The Director General of UNESCO has out-stepped the scope of her mandate by speaking out against a resolution adopted by the Executive Board of the organization.

This unusual and unacceptable position is an affront to the will of the Member States who voted to adopt the resolution successfully.

Further[more], Ms. Bokova’s explicit and outspoken declaration undermines the work and authority of the Executive Board and is, hence, completely unacceptable.

Ms. Bokova chose to appease the PR bullying campaign, run by Israel, against the resolution which addresses illegal Israeli practices in occupied East Jerusalem, including violations of the right of Palestinians – Christian and Muslim  to access their holy sites in the occupied capital and elsewhere in Palestine.

She willfully ignored the text of the resolution, which reiterates Jerusalem’s character as a city central to the three monotheistic religions.

The UNESCO Director General would be better advised to implement the mandate of the organization and safeguard cultural and heritage sites, like the Old City of Jerusalem, from the continued violations and transgressions it has endured for decades.

Rather than serving the provocative and misleading agenda of those cynically sidetracking the discussion to issues irrelevant to the content and objectives of adopted resolutions.

Ms. Bokova should focus her efforts on implementing the will of member states and preserving Jerusalem from the occupying power’s systematic colonization, including its assault on the character of the City and the basic rights of its Palestinian residents.

Finally, and in line with her mandate, we expect Ms. Bokova future public declarations to address the ongoing colonial policies in Palestine, which systematically assault and target our rich heritage, cultural, and religious sites, undermining coexistence and tolerance.

We also expect to hear her indignation at Israel’s continued provocations of religious fervor through allowing raids of the Haram Al-Sharif by political and religious leaders who openly call for the destruction of the holy compound.

Palestine will continue to defend itself through available legal and multilateral fora. We will not be intimidated by spin and PR bullying and efforts to divert attention from Israel’s violations and disregard for international law.

Our resolve to protect Palestine’s heritage as a bastion of tolerance and coexistence is unwavering and we appreciate the principled support of states who stand up to these fallacious campaigns and stand tall in defense of international law and the rights enshrined therein.”