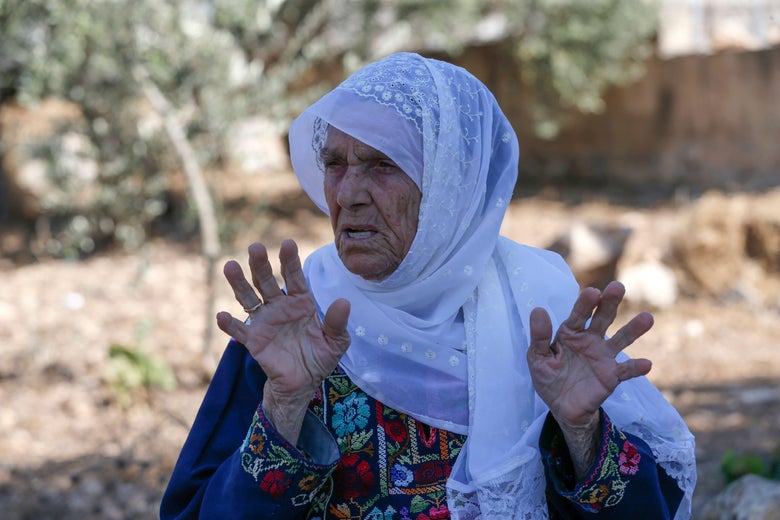 BEIT UR AL-FAUQA, WEST BANK¬†‚ÄĒ Rashida Tlaib‚Äôs grandmother does not understand why her granddaughter, a sitting U.S. congresswoman, could not visit her as originally planned.

Muftiyah Tlaib ‚ÄĒ who says she is somewhere between 85 and her early 90s ‚ÄĒ lives in the village of Beit Ur al-Fauqa, about 15 miles outside Jerusalem and close to the seam line between Israel and the West Bank, territory that Israel occupied in the 1967 war and that Palestinians hope to see as part of an independent state someday.

She lives in the same elegant limestone house in the same sleepy village she has called home since 1974 ‚ÄĒ the house where the whole village once came to celebrate Rashida Tlaib‚Äôs wedding, and the house that looks directly onto an Israeli settlement with a visible military presence.

‚ÄúShe‚Äôs in a big position, and she cannot visit her grandmother,‚ÄĚ she laughed, seated in her living room on Friday. ‚ÄúSo what good is the position?‚ÄĚ

In the end, Muftiyah Tlaib will not see her granddaughter in the coming week. The reunion would have marked the first meeting for the two since about 2007, she said.

[Rep. Tlaib says she will not go to Israel after the country initially rejected her request for a visit, then reversed course]

On Friday, Israel partly reversed¬†its decision from the day before¬†to deny entry to Tlaib (D-Mich.) and fellow congresswoman Ilhan Omar (D-Minn.) from a planned tour of the Palestinian territories, on the grounds that ‚Äúthe sole purpose of their visit is to harm Israel and increase incitement against it.‚ÄĚ

Israeli Interior Minister Aryeh Deri said Friday that he would approve a separate humanitarian request for Tlaib to visit her grandmother, or ‚Äúsity‚ÄĚ in Arabic.

‚ÄúThis could be my last opportunity to see her,‚ÄĚ Tlaib wrote in a letter to Israeli authorities. ‚ÄúI will respect any restrictions and will not promote boycotts against Israel during my visit.‚ÄĚ

For many Palestinians, the fact that Tlaib accepted these terms was itself an affront, a humiliating compromise in which she was made to forgo her opinions to see her loved ones.

‚ÄúIsrael is the oppressor and its racist attitude towards Palestinians is established policy,‚ÄĚ Nour Odeh, a Palestinian journalist, wrote on Twitter. ‚ÄúRashida should have known better. She should have acted with more dignity & pride.‚ÄĚ

‚ÄúWhen I won, it gave the Palestinian people hope that someone will finally speak the truth about the inhumane conditions,‚ÄĚ Tlaib tweeted. ‚ÄúI can‚Äôt allow the State of Israel to take away that light by humiliating me & use my love for my sity to bow down to their oppressive & racist policies.‚ÄĚ

‚ÄúSilencing me & treating me like a criminal is not what she wants for me. It would kill a piece of me. I have decided that visiting my grandmother under these oppressive conditions stands against everything I believe in ‚ÄĒ fighting against racism, oppression & injustice.‚ÄĚ

Tlaib has previously lent her support to the Boycott, Divestment and Sanctions movement (BDS), which Israel sees as increasingly threatening. Her positions have earned her the ire of pro-Israel advocacy groups and also of some of her Democratic colleagues in Congress.

But the quiet village of Beit Ur al-Fauqa, and specifically the view from Tlaib‚Äôs grandmother‚Äôs house, sheds at least some light on the force of her convictions.

A major highway now cuts directly through land the family says it once owned, Muftiyah Tlaib said, a thoroughfare that has altered the family‚Äôs access to olive groves and fig trees they still keep.

‚ÄúIt‚Äôs hard for me to reach my land on the other side,‚ÄĚ she said. ‚ÄúI used to cross by walking, but once a woman was hit by a car.‚ÄĚ

For Ashraf Samara, the head of the village council, Israel‚Äôs action toward the congresswoman is a window into the lived experience of the military occupation of the West Bank.

‚ÄúThis is all very strange for the media,‚ÄĚ he said in an interview, noting that he had met Rashida Tlaib about 20 years ago. ‚ÄúBut not for me as a Palestinian because I know the reality of occupation.‚ÄĚ

Samara said he appreciated that Tlaib and Omar had begun to challenge traditional American bipartisan support of Israel.

‚ÄúWhat I can say about Rashida and Omar is that they are starting to knock on the door and say something is wrong. Hopefully in the future they will change something in the opinions of ordinary American people.‚ÄĚ

Despite the diplomatic spat ‚ÄĒ in which President Trump urged, via Twitter, a foreign leader to ban two elected members of Congress ‚ÄĒ Muftiyah Tlaib said her positive views of the United States remain unchanged.

When asked about Trump and his repeated attacks on her granddaughter, she brushed off the question. ‚ÄúI don‚Äôt know him,‚ÄĚ she said. ‚ÄúI don‚Äôt care.‚ÄĚ

‚ÄúAmerica is for the people who work hard. America is for people who take care of themselves. For me, I‚Äôm happy to sit there under my tree. It‚Äôs worth the whole world to me,‚ÄĚ Muftiyah Tlaib said, noting she had spent significant time in Michigan helping raise Rashida and her siblings while their parents worked.

‚ÄúBut for her, she studied so hard. I remember I used to fill up milk for her and her brother because their mother had to work. They were worthy of the sacrifices their parents suffered, and in the end it paid off.‚ÄĚ

‚ÄúThere‚Äôs a special connection between Rashida and her grandmother,‚ÄĚ said Bassam Tlaib, Rashida‚Äôs 53-year-old uncle, a local electrician. ‚ÄúShe supported her when she got her first degree, and when she got her second degree in law. It‚Äôs very important.‚ÄĚ

« Inheriting Resistance in the South Hebron Hills: ‚ÄúI am my father‚Äôs daughter, if he can do this, so can I‚Ä¶ and more.‚ÄĚ Dangerous Bill in Congress to Crush the PLO and PA »