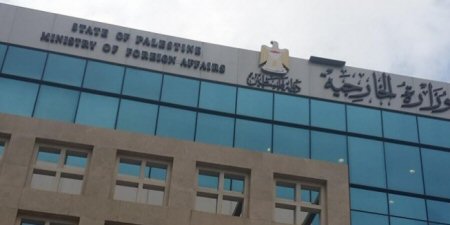 The Palestinian Ministry of Foreign Affairs (MOFA), in a statement on Wednesday, said that despite the attempt to hinder the magnitude of the diplomatic, political, and moral crisis facing the United States and Israel, after the declaration of President Donald Trump on Jerusalem, the transfer of the Embassy of his country to it, and Washington’s unlimited support to the occupation and its crimes and serious violations of international law, international legitimacy, and resolutions, the international community declared firm positions against Trump’s Declaration and the occupation’s crimes practiced against defenseless people, especially the massacre committed by the occupation soldiers against the unarmed participants in the Right of Return marches in the Gaza Strip, which reflected an international consensus on the justice of the Palestinian cause, the rejection of Trump’s Declaration, the transfer of the embassy, and the condemnations and criticism of the occupation authorities practices and violations ,which is evident in the speeches and positions of 14 countries in the Security Council, accusing the Security Council’s position regarding the US veto.

“This is in addition to the practical diplomatic steps taken by many countries in the world to express their stances, as some of them withdrew their ambassadors and others chose to summon their ambassadors from the occupying state, furthermore, several countries publicly demanded the formation of a fair and transparent commission of inquiry for the crimes of occupation,and the statements of condemnations issued in the name of senior officials in many countries,” MOFA added, according to the PNN.

The Ministry said that it highly appreciates and thanks all states that stood by the Palestinian people at this critical and delicate stage, as it affirms that this international consensus would not have been possible without the great efforts of President Mahmoud Abbas and the Palestinian diplomacy.

The entire world is united in condemning the crimes of the occupation. The entire world, in its rejection of Trump’s Declaration and the transfer of the embassy, stated that they stand in solidarity with the Palestinian people and with the martyrs and wounded Palestinians who have fallen, in clear reference to the failure of the efforts of  the United States, Israel, and their allies to exclude the Palestinian conflict from the center of international attention and the permanent agenda of the international community, it added.