Mustafa Barghouti: Unlike US Embassy, Palestinians Will Not Be Moved 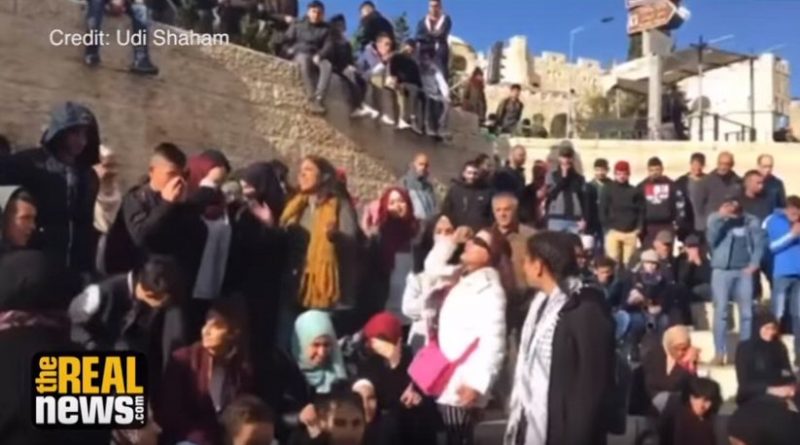 As protests erupt over Trump’s recognition of Jerusalem as Israel’s capital, Dr. Mustafa Barghouti says Trump and Netanyahu won’t succeed in displacing Palestinians from their homeland.

Mustafa Barghouti was born in Jerusalem, 1954. He is a leader of the Palestinian National Initiative, founded in 2002 and a member of Palestinian Legislative Council, former Minister of Information, unity government, March-June 2007.

AARON MATÉ: It’s The Real News. I’m Aaron Maté. President Trump’s decision to recognize Jerusalem as the capital of Israel has sparked the uproar that many predicted. Protests and a general strike are underway across the occupied territories.

PROTESTER: Trump, Trump you will see.

PROTESTERS: Trump, Trump you will see.

PROTESTER: Palestine will be free.

PROTESTERS: Palestine will be free.

PROTESTER: Palestine will be free.

PROTESTERS: Palestine will be free.

AARON MATÉ: Dozens of Palestinians have been wounded after Israeli forces open fire in both the West Bank and Gaza. Israel has now bombed and shelled Gaza after Palestinian militants fire rockets earlier today. Joining me from Ramallah is Dr. Mustafa Barghouti, leader of the Palestinian National Initiative. Dr. Barghouti, welcome. What is happening in the occupied territories today?

MUSTAFA BARGHOUTI: What happened is that we had demonstrations all over the occupied territories in protest to this reckless decision of President Trump, which made himself and his administration participant in a war crime, in my opinion; participant in violating international law, because by recognizing Jerusalem as the capital of Israel, he was accepting the annexation of unoccupied territory, and of course, he has shown not only complete biases but he has eliminated any future role of his administration in any so-called peace process. He has just aborted the same initiative he has been talking about before it was born.But the most important thing is that we have demonstrations all over, unprecedented demonstrations all over the occupied territories and there will be tomorrow probably much larger demonstrations. These demonstrations were peaceful, were non-violent. The Israeli Army responded using every possible amount of violence including heavy bombardment with teargas bombs, including using these metallic bullets that are covered with 10-piece of rubber pulling them rubber bullets but they were very heavy and very serious. They broke the legs and arms of many young people. They also used high-velocity bullet. The outcome is that we had at least 180 people injured in Bethlehem, in Ramallah, in Tulkarem, in Qalqilya and in many other places. Also, around Jerusalem and inside Jerusalem, several young people have been arrested, especially in Jerusalem itself. These are things that reflect the Israeli behavior of severe violence against peaceful number of demonstrations.Unfortunately, as usual, the mainstream American media does not report the non-violent nature of the Palestinian protests, and does not report the severe violence that is used by the Israeli Army and does not indicate how many Palestinians were injured today by the Israeli Army.

AARON MATÉ: Dr. Barghouti, you’d been a longtime advocate of mass non-violent resistance. But I’m wondering if you could reflect on the difficulties of that when you have an outpouring violence from Israeli occupation forces like we’re seeing today. Talk to me about the history of this when Palestinians try to be non-violent, the kind of force that they’re met with in response and how hard that makes it for Palestine to stay non-violent.

MUSTAFA BARGHOUTI: It’s very hard. I’ve been in this for more than 38 years now. I’ve been in hundreds if not thousands of demonstrations. I was injured myself nine times including once with two high-velocity bullets while I was trying to stop the bleeding of an injured man. What we saw in July is a very good example of that. It was a crystal example because in July, in Jerusalem, we had pure, pure, totally non-violent peaceful demonstrations. Much of the demonstrations were praying in the streets. We had tens of thousands of people participating and huge amount of discipline. Even when the Israeli Army was attacking people, did not responded with violence. Still they killed five young people and they injured 1,500 people including myself as well. They didn’t care.When they throw sand grenades at you, they don’t care where it hits. It can hit the eye and take it away. It can hit the head and kill the person. When they shoot these bullets, the bullets can be also very dangerous. Sometimes they even use tear gas bombs as bullets and we have lost one person who had a teargas bomb in his chest and his heart stopped and he died. We’ve lost people who suffocated from tear gas, but they also use high-velocity bullets. And if they catch anybody, the level of beating and violence that is used is also beyond description. This is a very violent Israeli Army and they use this violence thinking that they have full and total impunity in front of the international law.

AARON MATÉ: That protest in Jerusalem that you’re talking about in July, for just to explain for those who don’t know it, that was when Israel imposed all sorts of crackdowns on Palestinian access to the Al-Aqsa Compound in Jerusalem. Palestinians responded with the type of mass non-violent resistance that Dr. Barghouti is describing and ultimately won.Let me ask you though, Dr. Barghouti, in terms of the symbolism and the importance of Trump’s decision here. Why it so angered Palestinians? I actually want to get your response to what Trump said in his speech. When he said that Israel has the right to recognize, to establish whatever capital it wants. This is what he said:

DONALD TRUMP: Israel is a sovereign nation with the right like every other sovereign nation to determine its own capital. Acknowledging this is a fact is a necessary condition for achieving peace.

AARON MATÉ: Dr. Barghouti, that’s President Trump saying that Israel has the right to establish its own capital. So, we’re just going with what Israel says is its capital. What do you take issue with there?

MUSTAFA BARGHOUTI: Because it doesn’t concern only West Jerusalem, which is part of Israel per se. Jerusalem is now unified and enlarged, and it has annexed East Jerusalem, which is part of the occupied Palestinian West Bank and supposed to be part of the Palestinian future state. With annexing East Jerusalem, they have already annexed also the northern part of Bethlehem, the northern part of Beit Jala and the northern part of Beit Sahour. Beit Jala has already lost 48% of its land to Jerusalem. So, when you speak about Jerusalem, you speak about an entity that has annexed already huge parts of the West Bank as well.When Mr. Trump recognized Jerusalem as a capital of Israel, he recognized and accepted the annexation by force of an occupied territory of another country and that is considered by law, a war crime. That is considered a violation. The International Court of Justice, which is the highest court in the world, believe that annexing East Jerusalem is illegal and should be reversed. That settlement building inside East Jerusalem is illegal and should be reversed. That’s why the issue here is not about a sovereign Israeli decision. It’s about Israel taking away our Jerusalem and making it part of Jerusalem, and making it a capital of Israel as well, which means preventing us as Palestinians from having the right to our own territory and to our own seat in the long run. That’s one thing.But there is another thing that even in West Jerusalem, itself, there are 10,000 Palestinian families who used to live in West Jerusalem, who were displaced, ethnically cleansed in 1948. Many of these families live now in the States. Many live in Britain. They are refugees that are not allowed to come back to their homes, which were confiscated by Israel and given to Jewish population. Practically, you are talking about a city where apartheid is practiced in a much worse form than what prevailed in South Africa.I heard them also say, “All I’m doing is recognizing the existing reality.” Well, let me ask a question. Would a recognition of German occupation of Poland in 2nd World War make that occupation legitimate? Is it acceptable? Is it acceptable to legitimize the occupation of one country of another country and then say just because it’s a reality I will recognize it? That makes no sense.

AARON MATÉ: Let me just add that what’s interesting to me about Trump’s decision is that the US has effectively tacitly endorsed, although not officially endorsed, Israel’s annexation of East Jerusalem for years by giving it diplomatic cover when Palestinians tried to oppose it at the UN and also supplying billions of dollars in aid. But this is the first time that Trump is actually coming out…and coming out and saying through Trump that we are formally recognize it.Dr. Barghouti, you mentioned East Jerusalem being the capital of our future Palestinian states. Let me ask you about that. Saeb Erekat, who has been the top Palestinian authority negotiator for years, he said that the quest for a two-state solution is over, and now the struggle is for a democratic one-state across all of historic Palestine, which is quite a rhetorical departure for the Palestinian authority. Do you take that statement seriously? Do you think he’s being genuine? And what do you think the Palestinian strategy should be at this point?

MUSTAFA BARGHOUTI: I don’t mind. I think it’s a good idea. But he cannot just say it as a statement. He is the secretary of the PLO and the PLO must make that officially as its decision. We’ll meet in Gaza on Saturday. I hope they would agree that we’d decide that from now on we will struggle for one-state solution and go back to the borders of the whole of Palestine,one democratic state for everybody with equal rights. But this is just a statement. It’s not a program of the PLO yet. What we need, I’ve spoken about this in the last reconciliation meeting in Cairo, where I detailed in front of everybody how Israel has already destroyed tension for a two-state solution. But I said I cannot declare it on my own that now we have to change to one-state solution unless there is a joint Palestinian decision, which makes that declaration a unified Palestinian decision.But in my opinion, in general, in principle, this is the only alternative of Israel continues with the help of the United States killing the two-states option. The only alternative is one democratic state and not the system of apartheid that Israel is trying to impose on us. But people have to understand what does one-state solution mean? It means it’s not going to be a Jewish state. It means I can run to be the prime minister of that state. And a Palestinian could become the head of that state. And we would have more than half of the… There will be equal rights, which means Palestinian refugees will have the chance and right to come back whenever they want like Jewish people do. It means full equality.Of course Israel is not only adamant against one-state solution. It’s even much more adamant than even opposing the two-state solution. In reality, Israel does not want neither two-state solution nor one-state solution. They want us out of our land. They want us out of our homes. But that will never happen. We’re here to stay. We’re here to struggle. And we’re here to succeed. One day, we will get our freedom.

MUSTAFA BARGHOUTI: Thank you so much.