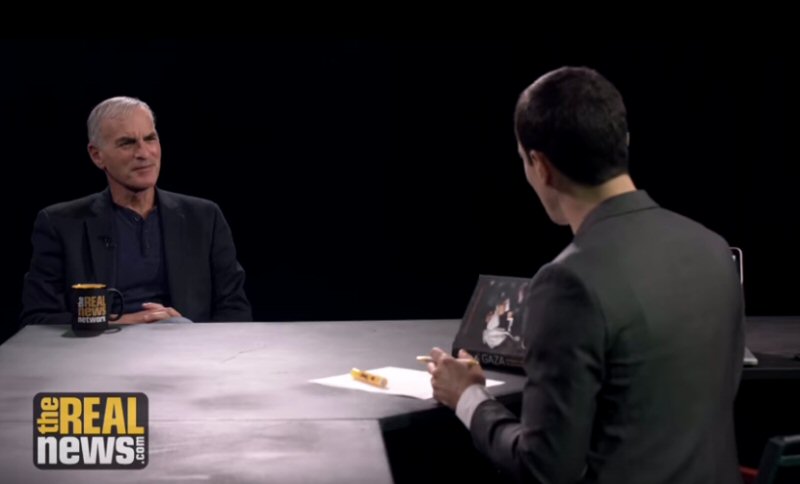 In part 2 of TRNN’s interview on his new book “Gaza: An Inquest into Its Martyrdom,” Norman Finkelstein argues that Israeli propaganda — sometimes with Hamas’ help — has wildly exaggerated Hamas’ arsenal and the effectiveness of the “Iron Dome” missile defense system.

Norman G. Finkelstein received his doctorate in 1988 from the Department of Politics at Princeton University. Finkelstein is the author of ten books that have been translated into 50 foreign editions. His latest is “Gaza: An Inquest into Its Martyrdom.”

AARON MATÉ: It’s The Real News, I’m Aaron Mate, continuing our conversation with Normal Finkelstein, author of the new book ‘Gaza, an Inquest into its Martyrdom.’ Norman, in this part, let’s get to what I think will be one of the most controversial elements of your book, which is the way you write about Hamas, the faction that controls Gaza. You say several things. You say A.) That the power and impact of their rocket fire on Israel has been overblown. You say also that while it’s commonly taken for granted that Israel has the right to launch attacks on Gaza in response to the Hamas rocket attacks, you actually say that Israel has no right to do so and that it’s in fact Hamas as the leader of the occupied population in Gaza that has the right to use rockets in self-defense. You also say that Israel’s Iron Dome system, this missile defense system that it’s used to defend itself against rockets coming from Gaza is actually ineffective and its impact has been overblown.Let’s start first with your contention about Hamas and their rockets. You don’t use the term missiles, you actually use the term sometimes firecrackers and fireworks.

N. FINKELSTEIN: Enhanced fireworks. First of all, there are several myths that were propagated during Operation Protective Edge. Some of them were revivals of past myths and some were new creations, new media creations, as we will use as the term ‘hasbara,’ which means the literal translation is public diplomacy, but more commonly it’s just defined as propaganda, Israeli propaganda.The Israeli Hasbara campaign, this is during Operation Protective Edge, basically had three components, two of which you mentioned. One, which is a recycled component in which President Obama referred to the Hamas rockets. No country would tolerate rockets being fired at it. Two, were what came to be called the Terror Tunnels. As President Obama put it, no country would tolerate tunnels being dug underneath its border into Israel — in this case, into Israel. Three, was Iron Dome. Iron Dome was recycled. It began with Operation Pillar of Defense when Israel was celebrating its technological wizardry with Iron Dome.As a factual matter, if one looks at the record, there were no Hamas rockets, there was no Iron Dome, and there were no terror tunnels. All three were just what I call in the book meta-props of Israel’s hasbara campaign. Now it’s a tall order in a short interview to try to cover all that but I’ll try to lay out the salient facts and then for the details, you’ll just have to plot through the book.Let’s start with the Hamas rockets. Were they rockets? First of all, nobody really knows what Hamas’s arsenal consisted of. One of the amusing things when you read the reports, and then here I include the human rights reports, they all list Hamas’s rockets and they give the different types, they give very precise numbers. They have 6,700 grad missiles, they have 5,000 of these rockets, and 3,000 of these rockets, and then a rational observer would ask the question, how do they know that? How would they know how many rockets and what quality and quantity of rockets they had? How would they know it?If Israel actually knew how many rockets there are, they must know where they’re keeping the rockets, otherwise how would they know how many there are and the quantity/quality, and if they knew and if they posed such a lethal threat to Israel, why wouldn’t they have preemptively eliminated them? We read every other day a story about an Israeli attack in Syria to preempt Syrian missile shipments to Hasbara, which I think are probably true. Why in the case of Hamas it had posed such a lethal threat? 6,700 of this, 3,000 of that, 5,000 of that, you can only have known those numbers if you knew where they were being stored and why didn’t Israel just eliminate them preemptively?Because all of it was a fake. Numbers are just pulled from thin air by Israel and then all the other organizations, including human rights organizations, just recycle the Israeli numbers. What do we know factually about these rockets? What do we know factually?Let’s look at the facts. Number one, according to the UN Observatory, there were 5,000 Hamas rockets fired at Israel, 2,000 mortar shells. Altogether we have 7,000 projectiles. Okay?How many people did the rockets kill? We know exactly. There were six civilians killed: five Israelis, one Thai guest worker. Six civilians killed. Of the six civilians killed, one — one –was killed by a Hamas rocket. Now we have a puzzling fact. 5,000 rockets, one person killed. A rational person would say that’s a strange discrepancy. Number two, you can say only one Israeli civilian was killed because Israel has a very effective civil defense warning system, which is true. Its civil defense warning system and shelters —

AARON MATÉ: Who were the rest killed by? Hamas killed one.

N. FINKELSTEIN: By mortars. Mortar shells. There were five civilians killed by mortar shells, one civilian killed by a Hamas rocket.

N. FINKELSTEIN: Altogether there were 7,000 projectiles.

N. FINKELSTEIN: Actually, the mortar shells inflicted much more damage than the rockets. Mortar shells killed quite a few Israeli soldiers on the border. Ten soldiers the mortar shells killed on the border, on the Israeli side of the border.Then you have one civilian killed. You think, well maybe it’s because they have effective civil defense warning system and shelter system, which they do, but that then poses a question: property damage. Israel on its foreign affairs website, I checked it, they kept a diary and I reproduced the diary in the book. You read down the list, 51 days, 7,000 projectiles, one house was destroyed. One house. You ask yourself, how could 7,000 projectiles only destroy one house? That doesn’t make very much sense.Then some people say, well, they have a very effective civil defense warning and shelter system and they also have the miracle of Iron Dome. But then you have a problem with Iron Dome. The problem is, number one, let’s go through all the things. Number one, Iron Dome is only deployed around the major cities, the major urban areas, okay? Now, 60% of the Hamas rockets landed along the border where there was no Iron Dome there, and most of the civilians, the majority of civilians stayed in place in the border, so Iron Dome wasn’t even a factor.Number two, Iron Dome, 840 projectiles were headed towards the major population centers. The official statistic is Israel deflected 80 to 90 percent of those Hamas rockets, as they call them, which would mean about 720, okay? Theodore Postol, who was one of the world’s leading authorities in anti-missile technology, he says not true, it was probably closer to 5 percent, not 80-90 percent. That would mean they deflected a whopping 40 projectiles. But let’s take even the Israeli figure. Let’s say it was 80-90 percent, 720 projectiles, okay?That still leaves thousands more, so even if you factor in Iron Dome and the official Israeli representation of it, how could thousands of projectiles, thousands and thousands of projectiles have caused next to no property damage? Let’s accept the Israeli official story about its effective civil defense and shelter system. How can that be? One house? Well, the answer is obvious because they’re not rockets, they’re enhanced fireworks and the paradox of these so-called rockets, the paradox is both Hamas and Israel have a mutual stake in pretending they are lethal rockets. Hamas, so it could pretend that armed struggle works, armed resistance works. Israel, so it can a pretext for its assaults on Gaza, we are under attack. It’s a mutually useful mythology, the rockets.Number two, Iron Dome. There’s a very easy way to test the effectiveness of Iron Dome. Let’s look at the damage done before there was an Iron Dome and the damage done after there was an Iron Dome. I went through the numbers, I was curious. Let’s look at … Let’s compare Operation Cast Lead with Operation Protective Edge.

N. FINKELSTEIN: Yeah, let’s see, and if you look at before and after, the same ratio of projectiles fired to civilians killed. It was about 300 to 1, if my memory serves, which is to say Iron Dome didn’t save a single life. Now you might say, “But that doesn’t take into account that the quality of the Hamas projectiles improved between Cast Lead and Protective Edge.” But there’s no evidence for that. I went through the record. There were a few “rockets” which reached further into Israel than in prior attacks but Israel admitted … Israel said they’re basically lead pipes because in order to get a further distance, they couldn’t put any ammunition in it. It had no pay load. It was just a pipe they were firing, so that was a fake, the Iron Dome. Then there were the Terror Tunnels.

AARON MATÉ: Just to clarify, these are the tunnels that militants in Gaza dig sometimes under the border between Gaza and Israel.

N. FINKELSTEIN: Right. If you look at the UN Human Rights Council report, which was a complete whitewash of Israel, a shameless whitewash. At that particular point, they were unusually honest. They said there’s no evidence whatsoever that the Hamas militants were targeting civilians with these tunnels. My speculation is the purpose of the tunnels was to try to capture some Israeli soldiers for a prisoner exchange because that’s been one of the tactics, which they have been pretty successful at because Israel has a very strange national ethos. The national ethos is that it’s a source of national mourning and woe if one of their soldiers is captured, and so it can be used as a bargaining chip.

AARON MATÉ: To the point where now they have a doctrine that says that if one of the soldiers are captured, they actually try to kill the soldier, which happened in Gaza.

N. FINKELSTEIN: That’s why I say it’s the weirdness of their national ethos. They bemoan the fact that one of their soldiers is captured, but if they have a choice, rather he be killed than captured.

AARON MATÉ: They did that in Gaza.

N. FINKELSTEIN: Yeah, they did that.

AARON MATÉ: Was it in Rafah?

N. FINKELSTEIN: They did it in Rafah.

AARON MATÉ: And then in the process killing …

N. FINKELSTEIN: Yeah, they carry on that way, so the reference is appropriate. They then proceeded for three days to just wreak horror, an inferno, in Rafah.

AARON MATÉ: The book is ‘Gaza, an Inquest into its Martyrdom.’ Author is Norman Finkelstein. Thanks so much for joining us.

Also in Interviews — 12/14/17  Dr. Ibrahim Al-Yazouri: We Made Clear the Difference between Zionists and Jews