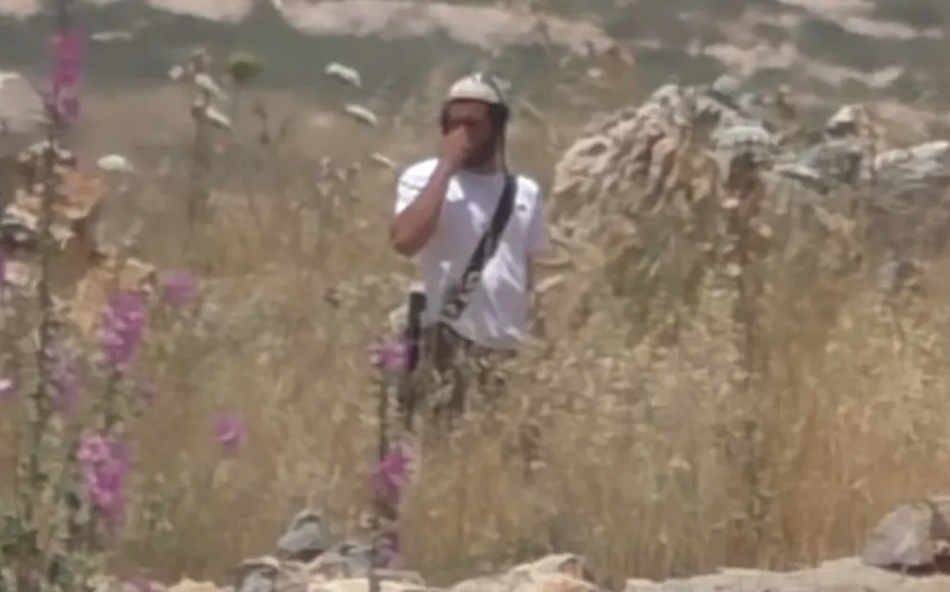 A video released by the Israeli human rights group B’Tselem shows a group of Israeli settlers attacking Palestinian villagers and setting their farms on fire on May 17th – and today, the group managed to identify one of the arsonists in the video as an off-duty Israeli soldier.

According to B’Tselem, on Friday, 17 May 2019, Israeli paramilitary settlers torched Palestinian farmers’ fields in Burin and ‘Asirah al-Qibliyah. In both villages, the settlers threw stones at the residents’ homes.

In ‘Asirah al-Qibliyah, where the area is controlled by military watchtowers, a settler even fired shots in the air. Soldiers nearby did not arrest the attackers and prevented the Palestinians from approaching their burning land.

The Israeli military followed the attack with a public statement containing the absurd and easily disproved claim that *Palestinians* had started the fires – a version of events that was then unquestioningly repeated by the Israeli and US media.

The attack took place about a kilometer away from the Giv’at Ronen settlement point, and the Israeli paramilitary settlers involved in the attack apparently came from the settlement of Yitzhar.

The fire-setting by the Israeli soldier is especially disturbing given that it took place in the midst of an extremely dry season in Israel and Palestine, with wildfires having burned hundreds of acres in Israel over the past several weeks, and burn bans in place across the country to try to prevent the spread of any more fires. Setting fires intentionally during such a climate and atmosphere could have a devastating impact and would normally have severe consequences.

Given the Israeli military’s record of failing to prosecute Israeli soldiers who commit crimes against Palestinians – even when those crimes are documented clearly on video – Palestinians impacted by the crime on May 17th say that they have little faith that the perpetrators in this case will be prosecuted.