On World Press Freedom Day, PCHR Organizes Activities on “No to Targeting Truth” 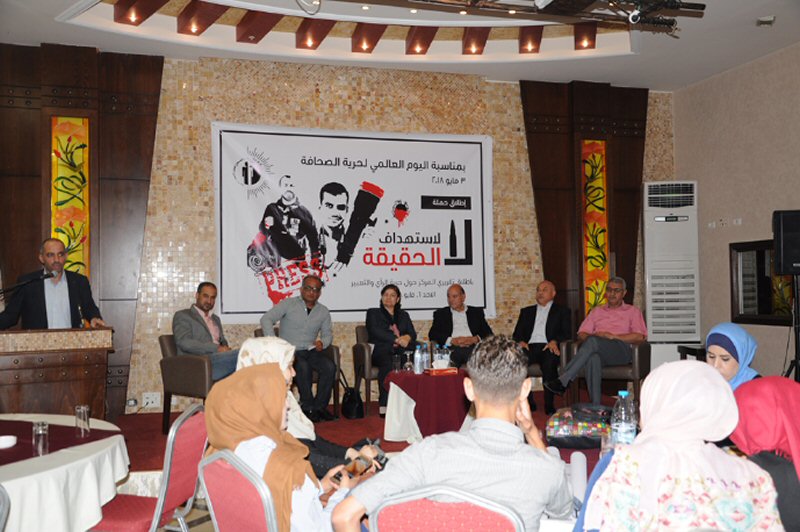 On Sunday, 06 May, 2018, the Palestinian Centre for Human Rights (PCHR) organized a campaign titled as “No to targeting the truth” on the World Press Freedom Day coinciding the third of May. The report included the release of PCHR’s two reports on freedom of expression, the first titled “Freedom of opinion and expression in the Palestinian Authority (PA)”; while the second titled “Silencing the Press” on Israeli forces’ violations against journalists and the media. The event, which was held in the Light House Restaurant’s hall in Gaza City, was attended by a large number of journalists, representatives of human rights and community-based organizations, and politicians.

The meeting started with introductory speeches by PCHR’s director and directors of the five effective media institutions in the Gaza Strip.

Raji Sourani, PCHR’s Director, he had an intervention in which he stressed the importance of journalists’ role and their integration with human rights work as part of human rights defenders. Sourani pointed out that the press is one of the most important standards in human rights, which is the basis for democracy and human rights. Sourani added: “If there is no immunity and respect for freedom of the press and supported by law, then democracy becomes a dead letter”. Sourani confirmed that Israel historically denied the truth and monopolized it, in addition to rigging its history to justify its crimes against the Palestinians. Therefore, the journalists’ generation should have the courage to tell the truth and expose the Israeli claims.

Director of the Community Media Center, Andaleeb Adwan, said in her speech that violations are intensifying against activists, journalists and others, coinciding with increasing their activities. Adwan also particularly spoke of what she called “soft violations”, which are often difficult to monitor and follow up and which occur in different contexts.

‘Adwan also stated two contexts for these violations, the first one was what the Palestinian de facto authorities do in the West Bank and Gaza, especially the work of the Government Information Office in Gaza, when a specific party requests to present films and other complicated procedures that followed these requests. The second violation was procedures practiced against women by the family and society when they attempt to express themselves, in which they are exposed to suppression.

Emad al-Efranji, Director of the Palestinian Journalists Forum, talked about the important role of journalists, concerning them as the spearhead in all fields to refute the Israeli false tale and present the real ugly image of the Israeli forces. Al-Efranji pointed out that journalists face all kinds of Israeli suppression, including killing, for this role. Al-Efrangi called for the necessity of providing professional safety tools for journalists, expelling Israel from all international forums and bringing them to trial due to their crimes against journalists. Al-Efrangi stressed the need to form an Independent professional syndicate that includes all press frameworks in a single crucible to defend the rights of journalists.

Bilal Jadallah, Director of the Press House pointed in his intervention about  the Israeli forces direct and deliberate targeting of journalists, killing and wounding  them and the prevention of entering the necessary safety equipment for their profession, stressing that the Israeli forces don’t accept publishing the truth for the world. Jadallah called for the importance to enhance the national unity and the Press Syndicate and media focus on Israeli violations locally and internationally. Jadallah also called upon the International community to intervene to stop the Israeli crimes against journalists and investigate those crimes.

‘Adel al-Za’noun, Director of al-Doha Media Center, explained in his speech the escalation of violations and crimes that journalists and media workers in the occupied Palestinian territory (oPt) are exposed to and called for ending them. He emphasized that his institution monitored  a large number of violations committed by the Israeli forces since January until nowadays, reaching 141 violations and 44 violations committed by the PA against the freedom of opinion and expression. Al-Za’noun called for the need for internal solidarity and unify the seven press bodies working in the oPt and having coordination between them in order to improve their work and confront the challenges. Al-Za’noun  suggested that PCHR should have a role in coordination between those institutions and should exert efforts to unify them.

Fathi Sabbah, Head of the Palestinian Institute for Communication and Development (PICD) had an intervention in which he referred to the historical Israeli violations against journalists and media workers, considering it as a systematic policy. He said that Yasser Murtaja and Ahmed Abu Husein were not the first to be killed, but they were preceded by prominent Palestinian writers and journalists. Sabbah talked about the internal situation pointing out that the both authorities in the West Bank and Gaza Strip committed violations on grounds of the freedom of opinion and expression. He mentioned for example, the case of arresting and interrogating with journalist Jihad Barakat, who was taking photos of the convoy of the Prime Minister, Rami Hamdallah, while he was at an Israeli checkpoint in addition to the case of journalist Hajer Harb, who made an investigation report about corruption in medical referrals in the External Medical Treatment Department in Gaza City. Sabbah highlighted that the Attorney General filed an indictment against Harb in absentia as she was traveling to Jordan for medical treatment and she was sentenced in absentia.

Following the opening session presented a concentrated review on the two periodic reports on the freedom of expression. The first one is Silencing the Press, which addresses the Israeli violations against journalists working in the oPt. This report, which is the twenty of its kind, was presented by Nafeth el-Khaldi, a researcher at PCHR. The second one is the state of the right to freedom of opinion and expression in the PA, which tackles the violations against the freedom of opinion and expression in the West Bank and the Gaza Strip. this report was presented by Mohammed Abu Hashem, researched at PCHR. Both reports cover the period between 01 April, 2017 and 31 March, 2018.

Israel Forces Another Palestinian To Demolish His Home In Jerusalem