One Israeli convicted, one acquitted in arson attack on ‘Loaves and Fishes’ church 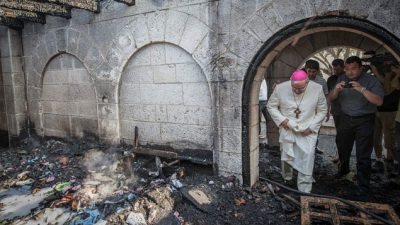 The Israeli District Court in Nazareth on Monday issued a mixed verdict in the 2015 arson that severely damaged the ancient church located on the site believed by Christians to be where Jesus multiplied the loaves and fishes.

Of the two Jewish extremists charged with the crime, one was convicted while the other was acquitted of all charges.

Yehuda Asraf, 21, was acquitted, while Yinon Reuveni, 22, was convicted of arson. Both men have been active for years in right-wing Jewish militia groups involved in attacks against Palestinians in the West Bank, and have lived in colonial outposts on illegally seized Palestinian land.

The fire, which was set in the middle of the night in June of 2015, wounded two church members and completely destroyed one of the buildings on the site.

Hebrew graffiti was found on another building within the complex, reading ‘Idols will be cast out’ or destroyed, AFP correspondents reported at the time. The text is part of a common Jewish prayer.

The church only recently reopened, two years after the arson attack. The damage cost over a million dollars to repair, and the Israeli government in September 2015 rejected a claim for compensation by officials of the Catholic Church.

Reuveni, the only person to be convicted in the arson attack – despite evidence that multiple people were involved – is also a suspect in a number of other hate crimes against Christians and Muslims living in the Holy Land.

One of the crimes he is suspected of participating in is an arson in February 2015 against the Dormition Abbey in Jerusalem.

A third suspect, Moshe Orbach, was arrested in late 2015, accused of inciting violence against Christians and other non-Jews living in the Holy Land for writing and publishing tracts detailing the “necessity” of attacking non-Jews, and laying out the practical steps on how to carry out the attacks.

Bentzi Gopstein, the right-wing Israeli leader of the extremist group Lehava, in 2016 reiterated the call for Jewish extremists to torch churches in the Holy Land.