One Palestinian Injured In Gaza, Many Suffer Effects Of Teargas Inhalation 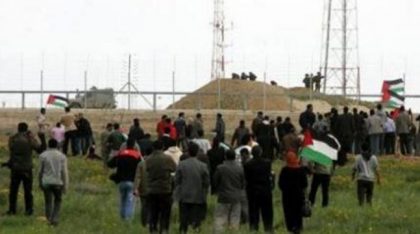 Medical sources have reported, Friday, that Israeli soldiers shot and injured a Palestinian teen with a live round, while dozens of residents suffered the effects of teargas inhalation, east of Gaza city.

The sources said that soldiers, stationed in the Nahal Oz military base, across the border fence, east of the Sheja’eyya neighborhood in Gaza, fired many live rounds targeting Palestinian protestors, wounding a young man in his leg.

The wounded young man was moved to the Shifa Hospital, west of Gaza city, a suffering moderate injury.

Medics also provided the needed treatment to many Palestinians who suffered the effects of teargas inhalation.

It is worth mentioning that Palestinians in border areas in the besieged coastal region are subject to repeated Israeli assaults, and ongoing invasions into their agricultural lands, in addition to frequent attacks against the fishers in Gaza territorial waters.