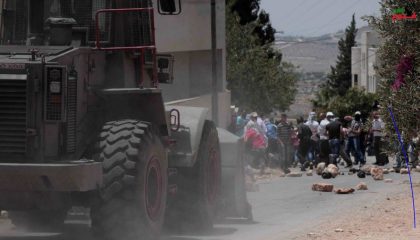 Morad Eshteiwy, media coordinator of the Popular Committee in Kufur Qaddoum, said the soldiers invaded the town while firing live rounds, gas bombs and concussion grenades against the protesters, and homes. Eshteiwy added that the soldiers shot a young man, Hikmat, 19, and his brother, Omran, 20, with live rounds in their thighs, before local medics moved them to Rafidia governmental hospital.

Eshteiwy added that clashes took place between the soldiers and local youths, after many army vehicles, including a large armored bulldozer, invaded the town, and sprayed several homes with wastewater mixed with chemicals, a substance frequently used against the residents and their homes as an act of collective punishment.

The week, the protestors marked the 49th anniversary of the Naksa, when Israel occupied the rest of Palestine in 1967.

Hundreds marched carrying Palestinian flags, and posters calling for liberation and independence, and the release of all political prisoners.

The residents of Kufur Qaddoum hold weekly protesters also demanding army to reopen the town’s main road that was completely closed more than 13 years ago, to grant the colonizers easy access to their illegal Kedumim Israeli colony, built on privately-owned Palestinian lands.

Also on Friday, the Popular Committee against the Annexation Wall and Colonies in Bil’in village, west of Ramallah, has reported that Israeli soldiers used excessive force against the weekly nonviolent protest, causing dozens of injures, and leading to burning farmlands.