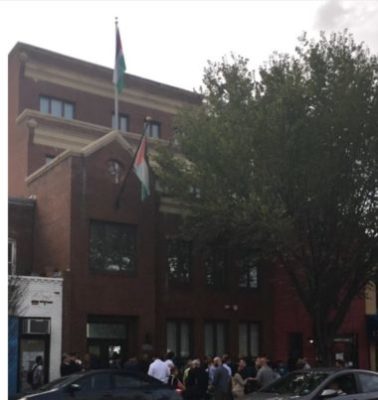 The Palestinian Representative Office at the United States in Washington D.C. has officially shut down, Wednesday, after the deadline by the Trump Administration for closing it went into effect at 4:30 PM.

Dozens of Palestinians and peace activists stood in front of the Palestinian Mission’s office in protest of the U.S. decision, and several speakers condemned the escalating hostilities by President Donald Trump and his Administration against the basic and historic human rights of the Palestinian people, and its support to Israel’s illegal occupation of Palestine, and it’s denial of internationally-guaranteed Palestinian Rights.

“The owners of the building can keep any flag up, as long as they want to, unless the U.S. government makes it its mission to remove the flag,” he said, “Our team at the Palestinian Mission has been frequently asked to remove the flag, but we kept it because it is a private building.”

He concluded by wondering whether “the next battle waged by the United States against the basic Palestinian rights will now be about the Palestinian flag!”

US Expels Palestinian Envoy And His Family

Abu Rodeina: “Jerusalem Is More Important Than Relations With The U.S.” 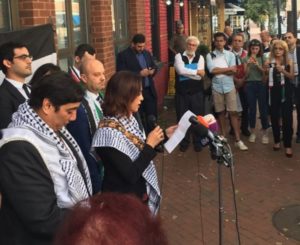