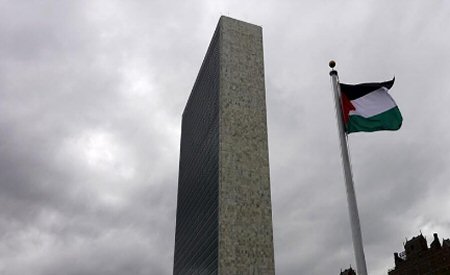 Palestine will launch a bid to become a full member of the United Nations, Palestinian Foreign Minister Riyad al-Maliki said on Tuesday.

The bid will go ahead despite the United States having said it will veto Palestine’s membership plans.

“We know that we are going to face a US veto but that won’t prevent us from presenting our application,” Al-Maliki told journalists.

He added that the Palestinians will begin lobbying members of the UN Security Council (UNSC) in the coming weeks.

The Palestinians presented a request for UN membership in 2011, but the application never came before the UNSC for a vote.

Since then, the country has joined more than 50 international organisations and agreements, according to the Palestinian foreign ministry.

Among them are the International Criminal Court and the UN heritage body, UNESCO.

In 2017, Interpol approved the Palestinian Authority’s membership bid, another victory in Palestinians’ drive for international representation despite strong Israeli opposition.

In his address, Abbas said Israel was hampering development in the Middle East and renewed his commitment to a two-state solution.

“Israel’s continued colonisation and occupation of the state of Palestine undermines our development and capacity for cooperation, coordination and obstructs the cohesive future development of all peoples of the region,” he said.

The Palestinian leader also said he was committed to a “peaceful solution that brings an end to the occupation and the realisation of the independence of the state of Palestine with occupied East Jerusalem as its capital, living side-by-side in peace and security with the state of Israel.”

In recent years, Jerusalem has become an even more important point of contest between Palestine and Israel, after US President Donald Trump’s decision in December 2017 to recognise Jerusalem as Israel’s capital and move the US embassy to the city.

Abbas subsequently broke off ties with the Trump administration, vowing to oppose any US peace proposal that he has warned would be biased in favour of Israel.

Under Trump, the US has also cut off hundreds of millions of dollars in aid for UN programmes benefitting Palestinians, including funds to the UN agency for Palestinian refugees (UNRWA), which was forced to scale back its education and health programmes.

The General Assembly last year adopted a resolution granting the observer-state of Palestine additional rights to act as chair of the G77, a bloc of 134 countries at the UN.

The US voted against that measure, arguing that the Palestinians should not be allowed to take the chair because it is not a full member-state.