Palestine To Open Embassy In Paraguay 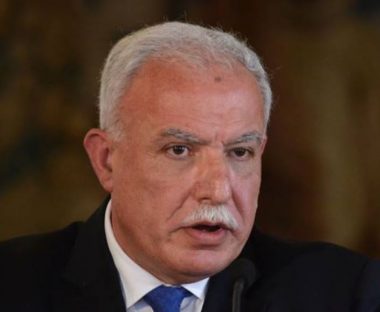 Palestinian Foreign Minister Riyad al-Maliki has reported that President Mahmoud Abbas has instructed the ministry to immediately inaugurate the Palestinian Embassy in the capital of Paraguay, Asunción.

Al-Maliki said that President Abbas issued a statement of gratitude to Paraguay after it rescinded its previous decision of opening its Embassy in occupied Jerusalem, and relocating it back to Tel Aviv.

He added that Abbas instructed the Foreign Ministry to immediately start the process of opening a Palestinian Embassy in Paraguay, adding that he will contact his counterpart in Asunción to take all needed and suitable measures.

It is worth mentioning that, following the Paraguayan decision to move to Embassy from occupied Jerusalem back to Tel Aviv, Israeli Prime Minister ordered the Israeli Embassy in Paraguay shut.

Benjamin Netanyahu said the Paraguayan decision will strain the relations between the two states, and considered the move as a “very serious and exceptional decision.”

On his part, the president of Paraguay, Mario Abdo Benítez, described the Israeli decision as misappropriate, and added that his country seeks a comprehensive and lasting just peace between Israel and Palestine.

He said the United States, and its president, needs to understand that all countries that seek peace and justice, will refrain from following the U.S. lead in moving its embassy to occupied Jerusalem.

He said that real peace is only achieved through abiding by International Law and all related United Nations resolutions.