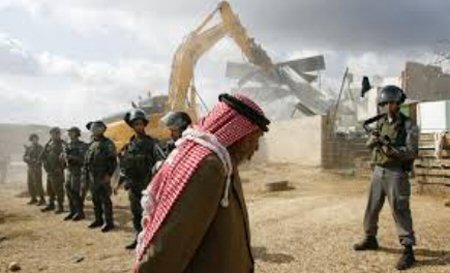 A Palestinian family was forced to destroy a section of their home in Silwan town, on Friday, after the Israeli occupation authorities threatened to demolish the entire house, the Palestinian Information Center reported.

Hatem al-Salaymeh, the homeowner, has been living in the home in the Ras al-Amud neighborhood in occupied East Jerusalem, with his wife and three children for 20 years.

Al-Salaymeh stated that he has been paying a 70,000 shekel fine every year for 20 years, due to the lack of an Israeli issued building permit.

He added that the occupation officials threatened the family that if they did not demolish the portion of the home, the authorities would raze the entire home, costing the family an excessive fine.

According to the United Nations Office for the Coordination of Humanitarian Affairs (OCHA), between December 22, 2020 and January 4, 2021; the Israeli occupation authorities demolished or seized thirty-four Palestinian-owned structures due to the purported lack of Israeli-issued building permits, displacing 22 people and otherwise affecting over 170. All but two of the targeted structures and all displacements were recorded in Area C, affecting 12 Palestinian communities. Two structures were demolished by their owners in East Jerusalem to avoid higher expenses and fines.