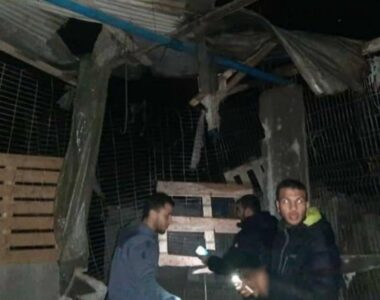 The family of Taiseer Abdul-Jawad (Abu Mazen), living in their home in the eastern part of the al-Maghazi refugee camp, in central Gaza Strip, has survived what would have turned into a massacre when an Israeli shell struck their home as they slept.

Abu Mazen said that he, his wife, and their children were sleeping in their beds, during the rainy very chilly night, when the Israeli army fired a shell that struck their three-story home, only two kilometers (1.24 Miles) from the perimeter fence.

He added that the shell caused excessive property damage to the home; however, the family survived the attack without physical harm, but the children suffered severe anxiety attacks. A relative of the family stated that the Israeli shell struck the asbestos on the roof of Taiseer’s home, causing a big hole and severe damage to the room underneath.

He added that Taiseer, his wife, and their children were fast asleep when at least one shell struck their home, causing severe damage “but the family miraculously survived the attack without physical harm.”

The neighbors rushed to the property to help the family out of their home before Palestinian medics and firefighters arrived at the scene.

The attack came just a few hours after the Israeli army fired many shells into several areas, east of Beit Hanoun, in northern Gaza, east of the Zeitoun neighborhood in the eastern part of Gaza city, in addition to two sites, used by armed resistance groups, east of the al-Maghazi and the al-Boreij refugee camp, in central Gaza, causing considerable damage without leading to casualties.