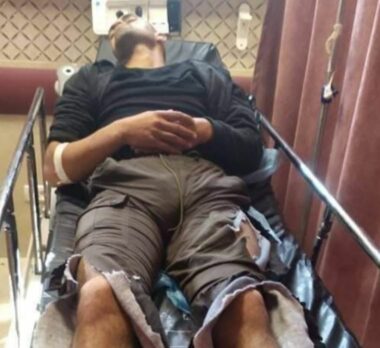 Hayel Omar, the brother of Nassir Bassel Omar, 31, said the colonists assaulted Nassir and pushed him on a rock, causing serious fractures, cuts, and bruises.

Omar added that the colonists came from the illegal Bracha colony, which was installed on stolen Palestinian lands, and were accompanied by soldiers, when they assaulted many farmers.

Nassir was rushed to Rafidia hospital, in Nablus, suffering serious fractures, and cuts, to the head and legs.

Medical sources at Rafidia hospital said the Palestinian requires surgeries due to his wounds.

In related news, the colonists attacked Palestinians in Khallet Hassan village, west of the central West Bank city of Salfit, and tried to abduct a young man.

Eyewitnesses said the colonists attacked several young Palestinian men who were documenting their violations, and attempted to abduct one of them,

It is worth mentioning that Israel is trying to illegally annex thousands of dunams of Palestinian lands, owned by five villages west of Salfit and South of Qalqilia, to construct a new colony and segregated roads that would serve the illegal colonies in the area.