Army Shoots A Palestinian, Causes Many To Suffer Effects Of Teargas Inhalation, Near Salfit 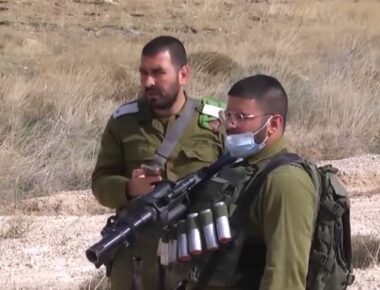 Israeli soldiers shot, Friday, a Palestinian with a gas bomb in the head, and caused dozens to suffer the effects of teargas inhalation, after the army attacks dozens of residents on their lands, west of Salfit in central West Bank.

Media sources said the Palestinians gathered on lands Israel intends to illegal annex in the al-Marahat and ar-Ras area, and performed Friday prayers, before the soldiers assaulted them.

The Palestinians were also planting trees and preserving the threatened lands in an activity organized by various political factions, Salfit City Council, the Wall and Colonization Resistance Commission, the Popular Resistance Committees in addition to several local groups and societies.

The soldiers attacked the Palestinians with high-velocity gas bombs, and concussion grenades, wounding one Palestinian, who was shot with a gas bomb in the head, and caused dozens to suffer the effects of teargas inhalation.

It is worth mentioning that Israel is planning to confiscate 50 dunams of private Palestinian lands, west of Salfit, to establish a new colony, and the army has already uprooted dozens of trees in the area.