Palestinian Poet Dareen Tatour Is Home, But Still Not Free 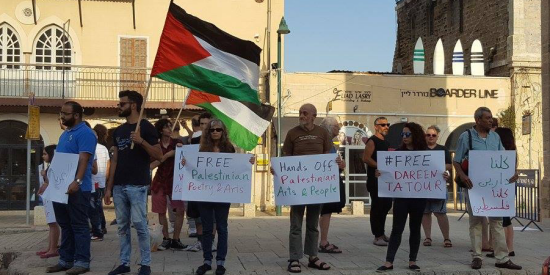 Her family and supporters joyously greeted her with music, food and fireworks when she arrived to the village on July 26th.

Yet, Tartour’s future remains uncertain: she will remain under house arrest and electronic surveillance in her family’s home. Moreover, her trial remains ongoing. If Israeli authorities find her guilty of “incitement to violence,” she will be taken back to prison for up to eight years.

Israeli forces arrested Tatour on October 11th, 2015. They charged her with incitement to violence, based on a YouTube video showcasing a poem she wrote titled Resist, My People, Resist Them, as well as two statuses and an image of Israa Abed posted on her Facebook profile.

“It is ironic, but not surprising, that I was sent to jail for protesting the killing of my people whereas actual Israeli killers roam free,” Tatour told The Electronic Intifada in April.

After her initial arrest, Tatour was shuffled between multiple Israeli prisons for three months. In January, Israeli authorities transferred her to strict house arrest in Kiyrat Ono – a suburb over 100 kilometers away from her hometown. There, in a small apartment her brother had to rent for the occasion, Tatour was trapped with round-the-clock Israeli guards, forbidden from accessing Internet, and forced to wear an ankle monitor at all times.

However, between her release from Kiryat Ono and arrival in Reineh, Tatour spent another unexpected night in Israeli prison. At a court hearing on July 25th, the private for-profit ankle monitor company failed to produce a report required to approve Tatour’s transfer to Reineh. In anticipation of “negative reply” from operators of the ankle monitor, the judge detained Tatour. She had expressed that she would prefer jail to the draconian conditions of her house arrest.

Tartour court proceedings continued the following day. But, the surveillance company did not produce the requied report. In lieu of the surveillance report, Israeli authorities decided that Tatour should be taken back to prison. However, when the Israeli guards arrived with Tatour at Damoun prison, the prison authorities maintained the court had “released her” and refused to lock her up. Though Tatour was stranded at the prison for some time, eventually her family was able to rescue her and happily take her home. A meeting with the surveillance company was scheduled for the following day.

On Thursday, Tatour told +972: “I feel much better now that I am in my home with my parents. Maybe I am nearing the end of the nightmare. Now I can have guests — I would be happy to meet the people who supported me.”

Solidarity with Tatour has grown over the course of her case. Demonstrations, vigils, and poetry nights for her freedom have been held in Haifa, Nazareth Jaffa, London, New York and Philadelphia. Moreover, over 400 acclaimed poets and writers, including Alice Walker, Viet Thanh Nguyen and Eve Ensler, signed a letter calling for Tatour’s freedom. In the letter, the artists decry her arrest as evidence of the Israeli government’s “desire to silence Tatour” as “part of a larger pattern of Israeli repression against all Palestinians.”

Indeed, Tartour’s arrest is exemplary of Israel’s increasing criminalization of Palestinians’ Facebook activity since the popular uprising began in October 2015. So far, since October 2015, Israeli forces have arrested 400 Palestinians for Facebook posts.