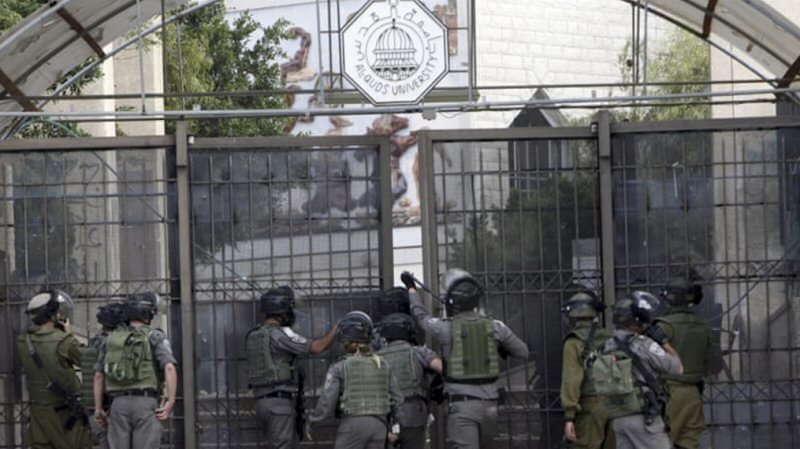 The Palestinian Federation of Unions of University Professors and Employees (PFUUPE) supports the faculty at Pitzer College calling to suspend a complicit study abroad program in Israel over its discriminatory practices.

PFUUPE, which represents more than 6,000 Palestinian university staff at 13 higher education institutions in the occupied Palestinian territory, commends our colleagues at Pitzer College for overwhelmingly supporting this principled stand for Palestinian human rights and for equality.

Most importantly, we thank you for listening to us and acting upon the call from the vast majority of Palestinians, including academics and students, to refrain from business-as-usual academic relations with Israeli institutions while we are forced to live under oppression.

We hold dear the universal right to academic freedom, on principle and because Palestinians are obliged to fight for it every day, along with our right to education.

Our faculty members have, for decades, faced the policy of¬†restricting movement and travel¬†imposed by the Israeli occupation. This severely hampers our academic freedom, namely to reach our campuses, to teach our students, to conduct research, to collaborate with other academics or institutions and to participate in conferences, whether within the occupied Palestinian territory or abroad.

Israel also obstructs importation of academic material and scientific equipment for Palestinian universities, effectively imposing a boycott on our institutions of higher education.

Israel‚Äôs discriminatory policies further prevent international academics and students, in particular those of Palestinian/Arab origins or those supporting Palestinian rights, from teaching, studying and attending conferences at our universities. The past two years have seen an uptick in racially- or opinion- based¬†denial of entry to Israel and refusal of visas and visa renewals, a repressive and deeply discriminatory Israeli policy that has long been customary.

Israel has repeatedly¬†bombed¬†Palestinian schools and universities in Gaza, and its illegal and brutal siege has denied the two million Palestinians there, including hundreds of thousands of students, their basic right to freedom of movement. Israel‚Äôs decade-old siege of Gaza is making it uninhabitable, according to the UN.

We ask the Pitzer College community to try to imagine what it is like studying, teaching or performing research under these dire conditions of racism, repression and violent oppression.

As long as Israel continues to deny Palestinian human rights and academic freedom and impose discriminatory policies based on origins and political opinion, students, educators and academic institutions have a moral obligation and an ethical responsibility to ensure their campus is not contributing in any way to denying Palestinians our right to education and life.

We urge the Pitzer College Council to uphold the principled stand taken by an overwhelming majority of its faculty not to be complicit in Israel‚Äôs denial of Palestinian rights and its blatantly racist and anti-democratic discriminatory policies.

Doing so will send a strong signal to the Israeli government and its deeply complicit universities that principled academic institutions will no longer stand by. They will instead use their power of moral persuasion to hold Israel to account and effect a change in the stagnant status quo of oppression, as was the case during the struggle to end apartheid in South Africa.

The Palestinian Federation of Unions of University Professors and Employees (PFUUPE)