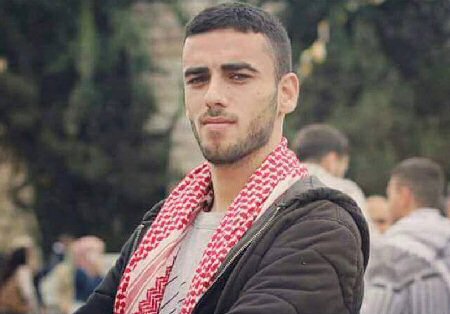 Palestinian university student Kifah Quzmar, in his final year studying business administration at Bir Zeit University, launched a hunger strike on Sunday, 26 March in Ashkelon prison, where he is held shackled and remains under interrogation after 22 days of imprisonment.

Quzmar, a popular, well-known student, was seized by Israeli occupation forces on 7 March at the Karameh/Allenby crossing from Jordan as he returned from travel. After denying that he was in their custody for several days, he was then denied access to a lawyer for 19 days. His lawyer, Anan Odeh, was finally allowed to see him on Sunday, 26 March, when his detention was extended by an Israeli military court for eight more days; Odeh reports that his morale and commitment are high and that he is determined to achieve his freedom.

No charges or allegations have been made against Quzmar. On Sunday, he reportedly demanded that he be charged with something or released; instead, his interrogation was extended for eight additional days. He has been transferred to four separate prisons and interrogation centers during his 22 days of confinement and has been kept almost continuously shackled throughout that time, subject to “severe and continuous pressure.”

In response, he launched a hunger strike and is now on his third day of hunger strike, demanding his release.

Quzmar was previously arrested in 2016 by the Palestinian Authority after he posted critical comments about the PA’s arrest of his friend Seif al-Idrissi on Facebook, and was released on bail after widespread Palestinian and international response to his arrest.

Kifah Quzmar is not alone; there are over 60 students from Bir Zeit University alone imprisoned in Israeli jails and denied access to their education. Hundreds of Palestinian students are arrested and held as political prisoners; indeed, students are specifically targeted for arrests, especially as annual Palestinian student elections approach.