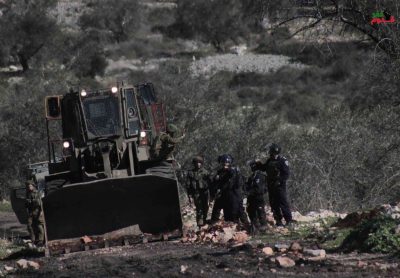 Residents of the Bethlehem-area village of Walaja, on Tuesday, confronted Israelis who came to their land and marked it in preparation to take it over, according to Hasan Breijieh, an activist with the anti-settlements, anti-wall committee in Bethlehem.

Breijieh told WAFA correspondence that staff from an Israeli company known as Yoel, accompanied by soldiers and staff from the so-called absentee department in the settlements of Beit El and Etzion, as well as the head of the Israeli land authority, came to an area of the village and put marks on land in preparation to seize more than 600,000 square kilometers of land in that area.

Palestinian owners of the land confronted the Israelis and showed them deeds which proved their ownership of the land, while Israeli occupation authorities said they were going to take over land upon which, it claims, its owners were absent.

Meanwhile, Israel continues to demolish Palestinian homes in the Jordan Valley, in an attempt to reduce Palestinian presence there, according to officials.

The Israeli army demolished three structures that were still in the building stage in al-Matar area, east of Jericho, under the usual pretext that they were built without a permit.

Jericho and Jordan Valley governor, Majed Fityani, said that Israel makes life difficult for Palestinians in the rich Jordan Valley through home demolitions, closing herding areas, declaring large areas to be firing zones, along with other measures which force them to leave the area. The United Nations and Israeli rights groups have said that Israel has intensified the demolition of homes in Area C of the occupied West Bank, which includes the Jordan Valley.

Israel plans to annex the scarcely populated Area C, which makes up roughly 60 per cent of the area of the West Bank.