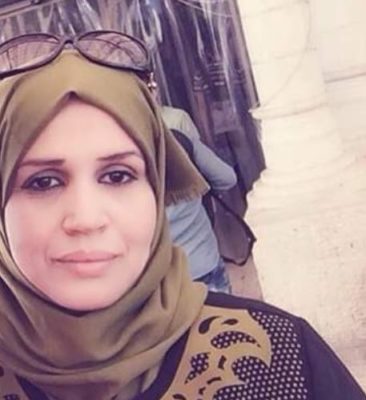 A group of Israeli paramilitary settlers attacked a Palestinian couple south of Nablus, in the northern part of the West Bank, on Friday, killing the woman and injuring her husband.

Aisha Mohammed Talal al-Rabi, 47, was riding in a car with her husband near the Za’tara roadblock,  south of Nablus, in the northern part of the West Bank, when a group of Israeli settlers came onto the road and began throwing rocks at their car.

The Israeli colonial settlers threw a number of large rocks, breaking the windshield of the car. They then continued to throw rocks, according to local sources, hitting the couple in the head and upper body.

One of the big rocks thrown by the illegal colonists at the car, smashed the windshield and struck her in the cheek and ear; she bled for about two minutes and died from her wounds.

Aisha and her husband, living in Bidya town, northwest of Salfit in central West Bank, were returning home after visiting one of their daughters, who is married and living in Hebron, in the southern part of the West Bank.

Another of the couple’s daughters was preparing to be married in the coming weeks.

It is worth mentioning that, on September 12th, 1999, Aisha’s brother, Fawzat Mohammad Bolad, was killed by Israeli soldiers in Kharbatha village, west of Ramallah, just hours before his wedding, when he was heading to Ramallah to finalize preparations for his wedding.