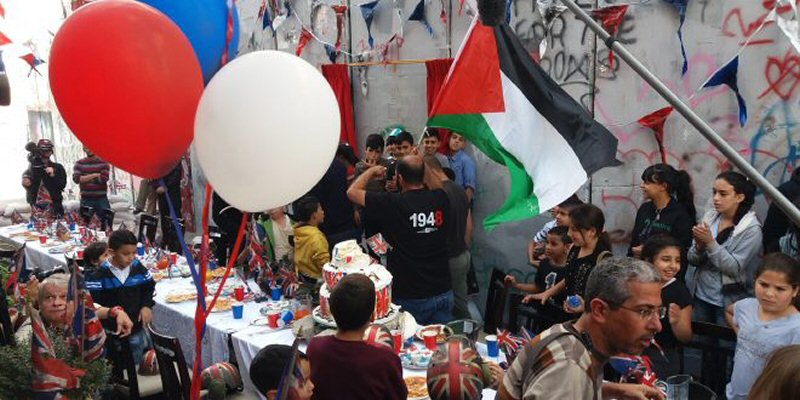 (PNN) On the Balfour Declaration centennial, Palestine launched a series of national and international events marking the centennial of the day that turned their lives upside down, through allowing the establishment of a national home for Jews on Palestinian homeland. Since then, Israeli massacres and crimes have begun, as the world silently watches.

Member of the Fateh Central Committee, Abbas Zaki, said that “Britain renews its racist and colonial ideology and reminds people that it was an oppressor country that despised all the peoples’ capabilities. When Richard asked that Palestine be a national homeland for the Jews many Jews  rejected the agreement including the Jewish leader of the British War Council, the ruler of India, and also David Alexander who was the head of the Jewish mission. He was also the president of the British Jewish Association.”

All Palestinians who marched in protest gave a message which confirms their continued loyalty to their homeland. The events marking the 100th anniversary of the Balfour Declaration are also a message that Palestinian generations will not relinquish their right to Palestine.

Governor of Bethlehem Governorate, Jibrin al-Bakri, said that there is rejection and condemnation for “the unjust decision against the Palestinian people, which is also a clear message that the Palestinian people are rooted in their land and working towards achieving their national rights to establish their independent state with Jerusalem as its capital.”

The events executives stressed that the message of the Palestinian masses to the Balfour Declaration is a message of anger to Britain, who must recognize its legal and political responsibility and correct its mistake. It also tells Palestinians to change their struggle away from the failed political projects.

In Bethlehem, the famous Banksy British hotel and a group of institutions marked the Balfour Declaration by a symbolic display in which the British Queen apologizes for the mistake committed by Britain towards the Palestinian people. The character of the British Queen then raised the curtain on the word “Sorry” which was engraved on The Apartheid Wall.

This event, in which dozens of children from refugee camps participated, did not prevent a group of activists from entering the exhibition site near the wall and emphasizing the crime of Britain through national chants confirming that the apology from Britain, even if symbolic, is unacceptable, demanding a British position correcting the historical mistake instead of Insisting on their crime. The Chairman of the Coordination Committee for Resistance, Munther Amira, said, “We come here so that our voices will be heard and we will fight for our freedom and for the implementation of the UN resolutions and of the International Law.”

Director of the Walled of Bethlehem, Wissam Salsa, said of the children who participated in the events at the Banksy Hotel: “The children are not just Palestinian children, but they children from living in Refugee Camps because of the Nakba, which is caused by the Balfour promise.”

These events represent a clear message to the Prime Minister of Britain, who is hosting the Israeli Prime Minister, in special ceremonies commemorating the promise.

The Palestinian people, today, continue their struggle and their rejection of the Israeli military occupation.