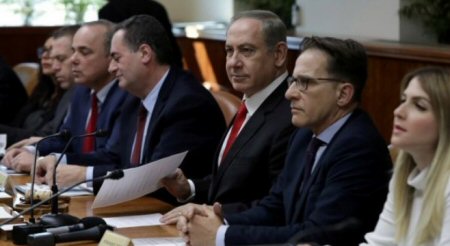 Radical right-wing Israeli ministers have reportedly launched a verbal attack on Palestinians, following the killing of a settler and the wounding of three others, in a stabbing attack at the illegal Adam settlement last night.

Palestinian sources said that far right government in Israel, having destroyed the peace process, is taking advantage of any event to take collective punishment measures against the Palestinian people, such as building more settlements, threatening to deport Palestinians and demolish their homes, while holding the Palestinian Authority accountable.

PNN sources said that those who follow the progress of Israeli statements are aware of the threat imposed by the government of Benjamin Netanyahu, adding that statements made by Israeli officials focused on collective punitive measures against Palestinians, and calling for the construction of even more settlements, forgetting that the cause of all that is happening is the continuation of  Israeli occupation of Palestinian land.

The statement comes after Israeli media announced that Avigdor Lieberman intends to approve the construction of 400 housing units, in the illegal settlement of Adam.

Avigdor Lieberman, Israeli minister of Defense announced  today Friday that he would promote the construction and approval of 400 housing units in a quick process within the planning authorities within a few weeks in response to last naight attack at Adam settlement.

Lieberman wrote this morning in his Twitter account following the attack in Adam settlment led to killing of one settler wounding 2 athores  that “the best answer to terror is the momentum of settlement in Judea and Samaria.”

“That’s why I left this morning to promote a plan to build 400 housing units in Adam and approve it in planning institutions in the coming weeks,” Lieberman wrote.

The minister added that the response to the damage  is to strengthen the settlement, and to approve 1,093 housing units that are ready for discussion.

For his part, Israeli Minister Zeev Elkin called the stabbing attack, in Adam settlement, a chance to deal with what he called Palestinian incitement.

He claimed that the Palestinian education system and sermons in the mosques are the the  reason behind the stabbing attack.

Minister of Intelligence, Yisrael Katz said, today:”I call on the prime minister; this is the time to allow the bill I initiated to expel the families of terrorists, as the most significant deterrent against individual terror.”

Katz added, “The law must be implemented to stop the Palestinian Authority funds, every shekel paid by Abu Mazen as an incentive to the families of the terrorists,”.

The sources said that all of these Israeli statements reflect the reality of the Israeli government, which does not believe in peace.