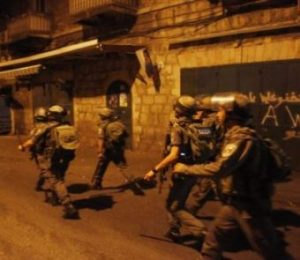 The Palestinian Prisoners Society (PPS) has reported that Israeli soldiers abducted, overnight and until dawn hours Thursday, eleven Palestinians, including two children, during invasions and violent searches of homes and property, in different parts of the occupied West Bank.

The PPS in Ramallah, in central West Bank, said the soldiers abducted Ahmad Odah al-Qadi, 50, and his son, Mustafa, from their home in Mazare’ Nobani town, after interrogating them and searching the property. 2

In Bethlehem, the soldiers also invaded a print shop in Bethlehem, in addition to abducting Mohammad Ibrahim al-‘Amour, 23, from his home in Teqoua’ town, east of the city.

Also in Bethlehem, the soldiers invaded homes in ‘Aida refugee camp, and abducted a child, identified as Ali al-Jawareesh, 13.

Furthermore, the soldiers invaded and searched homes in Shweika area, in the northern West Bank district of Tulkarem, and abducted Abdul-Salaam Mustafa Badawi, 40.

Another Palestinian, identified as Ahmad Fayez Sa’adi, was abducted in the Jenin refugee camp, in the northern West Bank district of Jenin, after the soldiers invaded and searched several homes.

In related news, the Israeli air force fired several missiles targeting a siege-busting commercial tunnel close to the Egyptian border, in Rafah, in the southern part of the Gaza Strip, killing two Palestinian workers, and wounding at least five others.