Soldiers Abduct A Palestinian, Summon Another, And Invade A Print Shop, In Bethlehem 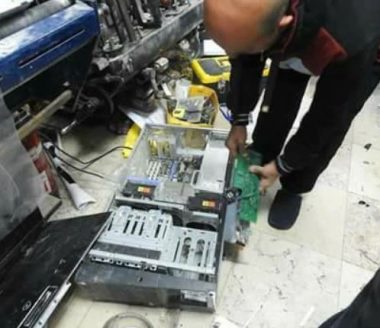 Israeli soldiers invaded, on Thursday at dawn, the West Bank district of Bethlehem, searched homes and abducted one Palestinian in addition to summoning another for interrogation, and invading a print shop.

The Bethlehem office of the Palestinian Prisoners’ Society (PPS) said the soldiers abducted Mohammad Ibrahim al-‘Amour, 23, from his home in Teqoua’ town, east of Bethlehem.

It added that the soldiers interrogated the abducted Palestinian, and his father, while violently searching the property.

In addition, the soldiers invaded a local print shop, violently searched and ransacked it, and confiscated equipment.

The soldiers also invaded the home of Mahmoud Ibrahim Rafati, in Bethlehem city, and summoned him for interrogation in Etzion military base and security center, south of the city.

Also at dawn, the soldiers abducted three Palestinians from their homes in occupied East Jerusalem, and one in Jenin, in the northern part of the West Bank.

Furthermore, the Israeli air force fired several missiles targeting a siege-busting commercial tunnel close to the Egyptian border, in Rafah, in the southern part of the Gaza Strip, killing two Palestinian workers, and wounding at least five others.