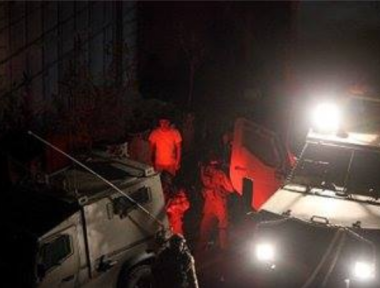 Israeli soldiers abducted, earlier Wednesday, seven Palestinians from various parts of the West Bank governorates of Bethlehem, Nablus and Jenin, including two who were abducted on military roadblocks.

Also in Nablus, the soldiers abducted Moath Mahmoud Abu Doqqa, 19, from Ramallah, after stopping him at a military roadblock near Yitzhar illegal colony, built on Palestinian lands, south of Nablus.

In addition, the soldiers abducted Osama Nasser Salah, 21, and a former political prisoner, identified as Mohammad Abdul-Ghani Souqi, 33, after stopping them at a sudden military roadblock on the Nablus-Ramallah road.

The soldiers were also heavily deployed on the Jenin governorate, in addition to installing sudden roadblocks, before stopping dozens of Palestinian cars and searching them while inspecting the ID cards of the passengers.

Also at dawn, the soldiers invaded the villages of Deir Ghassana and Nabi Saleh, northwest of the central West Bank city of Ramallah, attacked several Palestinians in their homes, before abducting three young men and wounding a family.