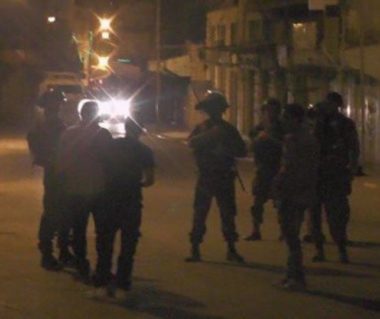 The Palestinian Prisoners’ Society (PPS) has reported that Israeli soldiers abducted,on Monday at dawn, 29 Palestinians from several parts of the occupied West Bank, including ten in Jerusalem.

The PPS said the soldiers conducted very violent searches of dozens of homes, and stores, across the West Bank, causing property damage, and interrogated scores of Palestinians while inspecting their ID cards.

In Ramallah city, the soldiers broke into several shops in the al-Irsal Street, in addition to the villages of Sarda and Abu Qash, before confiscating surveillance recordings and equipment.

In Tulkarem, in northern West Bank, the soldiers abducted Mohammad Salman, and a journalist, identified as Sameh Manasra.

Furthermore,soldiers stationed at Barta’a military roadblock, southwest of the northern West Bank city of Jenin, stopped and abducted a young man, identified as Omar Abdullah, from Arraba nearby town. The soldiers also detained a young man,identified as Walid Tawfiq Amarna, from Zibda village, west of Jenin, and interrogated him for several hours before releasing him.