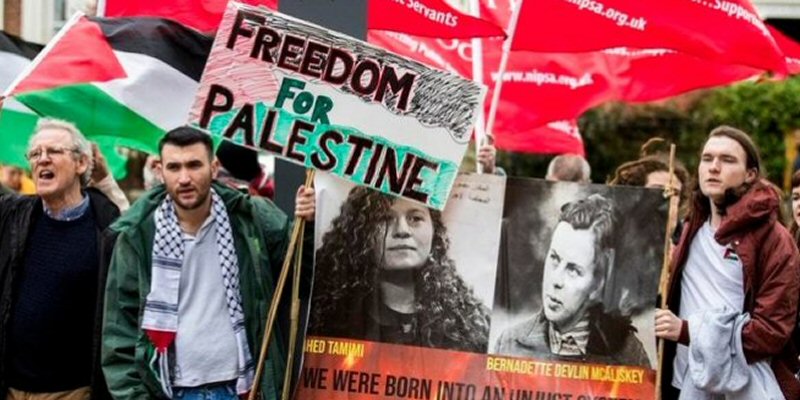 Angry scenes were reported to have developed as pro-Palestinian protesters confronted the UK’s Israeli ambassador, Mark Regev, at Queen’s University, in Belfast.

A protester was restrained as several attempted to follow Regev’s car as he left the historic institution following a visit to speak to students.

Around 70 pro-Palestinian protesters gathered outside Queen’s on Tuesday as Mr. Regev gave a talk to Masters students who study subjects related to politics and conflict resolution, as part of a workshop.

Queen’s defended the invitation to Mr, Regev, saying it permits freedom of thought and expression.

The spokeswoman added that Queen’s has also invited the Palestinian Ambassador to the UK to visit the university and engage with students in a similar format.

The Police Service of Northern Ireland (PSNI) maintained a presence as protesters waved Palestinian flags and took part in chants which included “Free Palestine” and “Regev out”, outside the building.

Earlier, according to the PNN, a number of protesters took part in a sit down demonstration blocking a corridor inside the building.

Ahead of the visit, the Queen’s Student Union President Connor Veighey and People Before Profit MLA Gerry Carroll called for the invitation to Mr. Regev to be rescinded.

Sinn Féin MLA Caoimhe Archibald has expressed concern at the decision by Queen’s University to invite Israeli ambassador Mark Regev to speak at an event on campus.

The party’s Further and Higher Education spokesperson said:“I am deeply concerned that Queen’s University has invited the Israeli ambassador to speak on campus, today.

“The ambassador is a representative of the Israeli government who are involved in murder and human rights abuse against the Palestinian people whilst also endorsing their apartheid policies.

“Over recent months we have seen the slaughter of hundreds of Palestinians – men, women and children – by the Israeli army. This is disgraceful. Sinn Féin support the Boycott, Divestment and Sanctions (BDS) campaign, which includes an cultural and academic boycott of Israel.

“The collapse of the South African apartheid regime proved the effectiveness of cultural, academic and economic boycott as a way of securing change.

“Queen’s University should not associate itself with Israeli government representatives whilst these actions continue and whilst the Israelis refuse to engage in meaningful negotiations.

“I have written to the Vice-Chancellor to express concern at this matter and to highlight the plight of the Palestinian people.”