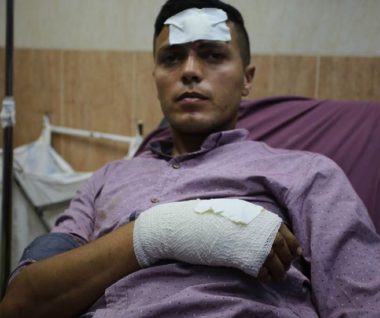 On Wednesday, a group of colonialist settlers, illegally living on Palestinian lands, west of the northern West Bank city of Nablus, attacked Palestinians while picking their olive trees, wounding one.

The attack took place in Palestinian orchards in Bizzariya village, northwest of Nablus, and is part of dozens of violations, which escalate during the olive harvest season in the occupied West Bank, and include cutting and uprooting trees, harvesting the trees and stealing the produce, in addition to flooding the lands and orchards with sewage. On Wednesday evening, a group of settlers attacked three Palestinian homes in Orif village, south of Nablus, in the northern part of the occupied West Bank.

On Sunday, colonialist settlers invaded Palestinian lands in the al-Khader town, south of the West Bank city of Bethlehem, and uprooted 400 grape and olive saplings.

On Saturday, the colonialist settlers attacked many Palestinians while picking their olive trees in orchards owned by Burin villagers, south of the northern West Bank city of Nablus.