After the area was first declared a ‘closed military zone’ (CMZ) on 1st November 2015, Palestinian residents were put under a closure imposed as a form of collective punishment, denying them their most basic rights and even their humanity – degrading them to mere numbers. Only Palestinian residents registered with the Israeli forces as a number where allowed to reach their homes inside the closed military zone. At the same time, Israeli settlers were free to roam the streets and do as they please, without ever being stopped – a ‘normality’ under the apartheid-rule in occupied al-Khalil.

Despite the lifting of the zone, the stairs leading to Qurtuba school have remained closed for Palestinians. This not only cuts off the main access for all the families using these stairs to reach their homes, but also visitors to the Muslim cemetery and the weekly second hand market in Qarantina. On Friday, 24th June, Israeli forces denied a Palestinian man walking down these stairs, on the grounds that he ‘is Palestinian’. Whereas first they allowed the man to go down the stairs and turn around the corner, they stopped him right after, ordering him to climb up the stairs again, as he’s not allowed to pass. Two internationals, on the other hand, when enquiring whether they have to go back now, were told that the man was only sent back because ‘he’s Palestinian’, but they clearly ‘were tourists’. The denial of access based on ethnicity clearly is an apartheid-strategy – allowing privileges to non-Palestinians only. 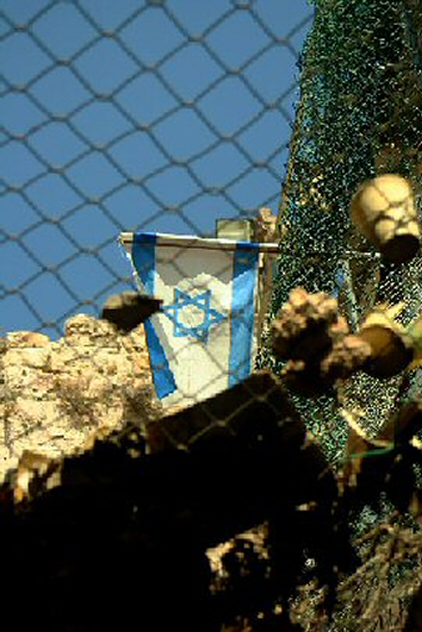 A net installed in the Old City to prevent garbage dropped by Israeli settlers into a Palestinian area. (Wiki Commons)

At Shuhada checkpoint, that leads from the tiny strip of Shuhada Street accessible to Palestinian pedestrians into the H1 area of al-Khalil, Israeli forces often delay Palestinians trying to pass. Early Friday morning, they yelled ‘uskut’ (Arabic for ‘shut up’) at Palestinians ringing the bell for them to open the turnstile – repeatedly. Once finally allowed to pass through the checkpoint, a settler youth was standing inside the checkpoint behind the bullet-proof window with the settlers, chatting with them and watching them check IDs. This illustrates the apartheid-policies enforced in al-Khalil – whereas Palestinians are harassed and intimidated, settlers are neighbours and friends – even allowed to be inside the checkpoint with the soldiers. In the early afternoon of the same day, soldiers arbitrarily decided to close the exit of the checkpoint, leading into the H1 neighborhood, claiming that ‘there’s a training’, but refusing to tell when this would be finished, forcing Palestinians to wait without any reason.

These measures are just some examples, in a very tiny area within the H2 area under full Israeli military control, exemplifying the arbitrariness and every day humiliation enforced by the Israeli forces on the Palestinian population.