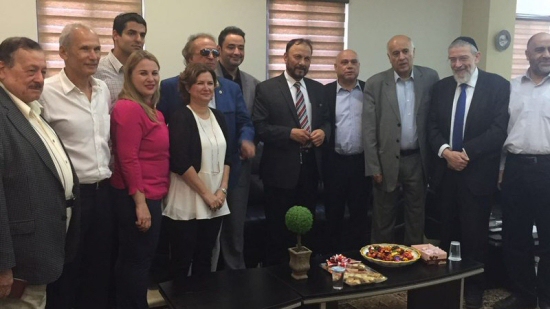 The group “BDS Gulf” said that the visit by academics and businesspersons, led by former Saudi general Anwar Eskhi, “is the newest episode in the ongoing Saudi normalization [with Israel], whose pace has increased in recent years and which has been openly led by such public figures as Eshki and former intelligence chief Turki al-Faisal.”

The visit is all the more shameful, coinciding as it does with the second anniversary of Israel’s 51-day summer 2014 assault on Gaza that killed more than 2,200 Palestinians, BDS Gulf stated.

Eshki has held numerous senior posts, including as an advisor to Prince Bandar bin Sultan, the former Saudi intelligence chief and ambassador to the US. The general now heads a “strategic studies” think tank in Saudi Arabia.

News of the visit generated harsh criticism from Saudi and Gulf commentators and social media users.

Eshki tried at first to deny the visit. After that failed, Eshki claimed he went in response to a Palestinian invitation, seeking to revive the Saudi-sponsored Arab Peace Initiative.

But, the visit is a sign of a warming relationship between Saudi Arabia and Israel founded on their mutual hostility towards Iran, especially since the latter’s rapprochement with the United States and Europe, following last year’s deal over its nuclear energy program.

The BNC strongly condemned the “shameful” role of the Palestinian Authority in helping to facilitate official Arab normalization with Israel.

Attempt at denial
Last week, the Tel Aviv newspaper Haaretz revealed that Eshki met with Dore Gold, the director-general of the Israeli foreign ministry, and Major-General Yoav Mordechai, the head of COGAT, the Israeli military bureaucracy that rules over millions of Palestinians in the occupied West Bank and Gaza Strip.

The Saudi delegation also met with members of Israel’s parliament, the Knesset.

Eshki initially denied in comments to Arabic media that he had visited Israel. “Those who are writing certain words should be sure that I did not visit Israel,” he said. “Rather, I visited Ramallah at the invitation of the Palestinians.”

Eshki added that he had visited the families of “martyrs” – Palestinians killed by Israeli occupation forces – and attended the wedding of the son of Marwan Barghouti, the Fatah militia leader currently in Israeli prison on a life sentence.

The Saudi general added, “the Israelis wrote that I visited Israel, because they consider Jerusalem to be Israeli.”

But after Israeli media published details of the Saudi delegation’s meetings with Israeli officials, Eshki offered a different spin, doubling down on using the Palestinians as cover.

He insisted in a television interview that he had only traveled to “Palestine” at the insistence of Jibril Rajoub, the Fatah strongman and former PA intelligence chief who now heads the Palestinian Football Association.

Eshki claimed that the purpose of the visit was to tell Palestinians that “we are with you with our hearts, with our minds and with our money,” and to promote the Arab Peace Initiative floated by the Saudi king in 2002.

Eshki claimed that his meeting with Dore Gold had taken place on “Palestinian land,” at the King David Hotel in West Jerusalem, and that its only goal was to push forward peace with the Palestinians.

While the exact level of Palestinian Authority involvement in Eshki’s visit is unclear, PA officials have previously stated that travel to Jerusalem, out of bounds for most Palestinians in the West Bank and Gaza Strip due to Israeli restrictions, does not constitute normalization.

An uncredited photo published by Haaretz, shown at the top of this page, shows Eshki meeting with Israeli figures along with the PA’s Rajoub.

Eshki has insisted that his main focus remains the peace process, yet the Netanyahu government has consistently rejected the Arab Peace Initiative, saying so as recently as last month.

It would seem odd to reward such intransigence with a public sign of normalization if indeed advancing the Arab Peace Initiative was the goal: the peace initiative itself conditions normalizing ties with Israel on a full Israeli withdrawal from the occupied West Bank and respecting other Palestinian rights.

Common enemy: Iran
While Eshki has tried to derail criticism of his visit by touting support for the Palestinians, the general has himself previously indicated that Saudi Arabia’s enmity toward Iran is behind the drive to seek closer ties with Tel Aviv.

“The main project between me and Dore Gold is to bring peace between Arab countries and Israel,” Eshki told The Wall Street Journal in August 2015.

“This is personal, but my government knows about the project,” he added. “My government isn’t against it, because we need peace.”

Israel and Saudi Arabia “need to profit from each other,” Eshki said, describing them as two powers that “don’t want trouble in the region.”

A hardline anti-Palestinian, the US-born Dore Gold has served in a number of senior Israeli posts, including as an advisor to Prime Minister Ariel Sharon, as well as to Benjamin Netanyahu during his first stint as prime minister in the 1990s. Netanyahu appointed Gold as director-general of the foreign ministry last year.

Israel sees Saudi Arabia as an ideal partner – both countries are founded on and claim legitimacy from a sectarian and exclusivist religious identity.

Gold articulated this strategy in a speech last month, but said that the burgeoning ties with such regimes often had to be kept under wraps: “They have populations which may not always look favorably upon that coverage.”

Eshki told The Wall Street Journal in 2015 that the initial focus of his contacts with Gold was the Palestinian question, but then shifted toward Iran.

“I found that our idea and their idea was close together against Iran,” he said.

But Eshki’s concern for Israel’s safety extends to installing more pliant rulers in Iran and repartitioning the region – a common goal with the American and Israeli far right.

At a joint appearance with Gold at the Council on Foreign Relations in Washington, DC, in June 2015, Eshki laid out what The Wall Street Journal called “a vision for the Middle East that included Arab-Israeli peace, regime change in Tehran, democracy in the Arab world and the creation of a Kurdish state.”

Eshki has also expressed opposition to armed resistance against Israel.

“When we say with ossified thinking that we are fighting them and resisting them when they have superior weapons, it means we are only destroying ourselves,” Eshki said this week.

While lauding Saudi Arabia for giving money to Palestinians “so they can live,” Eshki admonished Iran for providing the Palestinian political and military resistance group Hamas with weapons “so they can destroy themselves.”

“Let’s look for another way,” Eshki said, “rather than resistance that has failed to destroy a single fly.”

Eshki has, by contrast, not been seen to advocate for an end to US military aid to Israel, weaponry that is used to violently colonize Palestinian land and kill Palestinian civilians.

Warming ties
Eshki has denied that the Saudi government backed his visit, but Israel lobby analysts are under no illusion about the significance of the overtures to the Zionist state.

Sohrab Ahmari, the neoconservative editorial writer for The Wall Street Journal who interviewed Eshki in 2015, observed that the general “has spearheaded Riyadh’s outreach to Jerusalem.”

Simon Henderson, an analyst for the Washington Institute for Near East Policy, a think tank close to the Israel lobby group AIPAC, revealed that last week’s visit “may not have been Eshki’s first trip to Israel.”

Henderson noted that the large delegation accompanying Eshki was significant: “Despite the absence of mutual diplomatic recognition, all of these individuals would have needed special dispensation from the Saudi government to make the journey.”

And it is clear that the rapprochement is being driven from much higher up. Henderson observed that the “main Saudi personality in the slow process of publicly acknowledging Israel has been former intelligence chief and ambassador Prince Turki al-Faisal, a more high-profile figure than Eshki.”

And last year, al-Faisal shared a stage at the Washington Institute for Near East Policy with Israeli general Yaakov Amidror, the former national security advisor to Netanyahu.

These are signs that despite the denials, the public warming toward Israel represented by Eshki’s visit almost certainly reflects the views of Riyadh.

Aaron David Miller, a former US diplomat and Israel lobby stalwart who memorably described himself as “Israel’s attorney,” commented that Eshki’s visit “reflects far more change in Saudi views than those in Israel.”

“The Jewish state has long pressed for normalization with the Arab states, particularly those in the Gulf,” Miller added. “Such a public visit suggests Saudi willingness to test the waters.”

“If Eshki does not represent [Saudi Arabia’s] official stance, as the Saudi government has previously stated, then there should be speedy measures to investigate him and all who took part in the delegation,” BDS Gulf said in its statement.

The group added that normalization with Israel violates the values of Arab and Gulf society, including long-standing popular support for the anti-colonial struggle of the Palestinian people.

BDS Gulf urged civil society in the region to push for strong political and legal measures “to combat the crime of normalization with the Zionist entity.”

In the meantime, it urged boycotts of the companies of any businesspersons who take part in such visits to Israel, as well as for boycotts of firms, including G4S, HP and Alstom, that operate in Gulf states and are complicit in Israel’s occupation.

In its statement, the Boycott National Committee called on Palestinians to escalate pressure on the PA to end its so-called “security coordination” with Israeli occupation forces and to end all activities in support of normalizing Arab states’ ties with Israel.