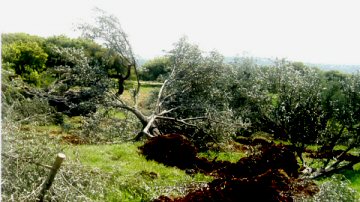 Ghassan Daghlas, who monitors settlement activities in the northern West Bank, said a number of Israeli settlers from the nearby Rachalim settlement overnight chopped down a total of 43 olive trees using chainsaws in al-Wad area, north of As-Sawiya village.

The chopped olive trees reportedly belongs to Juma’h Fathallah, a resident of the village, according to WAFA.

Settler violence against Palestinians and their property is routine in the West Bank, and is rarely prosecuted by Israeli authorities.

Over 600,000 Israeli Jewish settlers live in settlements and settlement outposts across the West Bank, including East Jerusalem, in contravention of international law.

Approved by successive Israeli governments, settlement construction is part of an Israeli effort to colonize as much of the West Bank, including East Jerusalem, as possible.