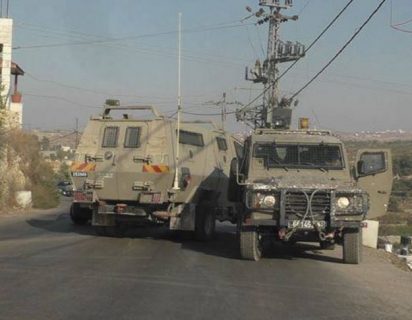 Israeli soldiers invaded, on Friday afternoon, Beit Ummar town, north of the southern West Bank city of Hebron, and clashed with local youths who hurled stones at them; the army fired gas bombs and concussion grenades, causing many residents to suffer the effects of tear gas inhalation.

Mohammad Awad, the coordinator of the Popular Committee against Colonies in Hebron, said the soldiers invaded ‘Aseeda area, in the eastern part of Beit Ummar, and fired gas bombs and concussion grenades, causing many injuries.

The soldiers fired several gas bombs at farmers on their lands, also causing many of them to suffer the effects of teargas inhalation.

Awad stated that the soldiers frequently invade Beit Ummar, and conduct provocative acts by installing roadblocks, in addition to breaking into homes and searching them while interrogating the Palestinians.