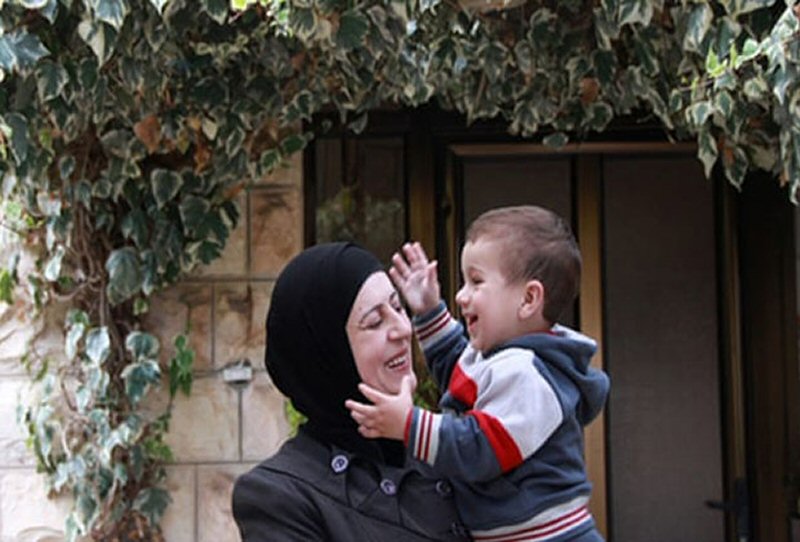 Whenever someone asked Majd where his father was, he would run to the sitting room and point to a poster hung on the wall.

For the 15-month-old toddler, “baba” (Arabic for dad), was a picture, a voice on the other end of the telephone and a lot of stories that his mother, Lydia Rimawi, recited. This was because his father, Abdul Karim Rimawi, has spent the past 13 years in an Israeli prison, where he is serving a 25-year sentence.

Majd is one of more than two dozen Palestinian children born to a prisoner family in the past two years through a combination of sperm-smuggling and in vitro fertilisation (IVF).

Around 7,000 Palestinians are serving time in Israeli prisons, with nearly 1,000 facing sentences of 20 years or more. Denied conjugal visits and separated from visitors by glass panels, sneaking sperm samples out is their only hope to make a family.

At the Razan fertility clinic in Nablus, doctors told Al Jazeera they had frozen around 70 prisoners’ sperm samples and were getting more from behind bars, although the frequency has fallen dramatically in the past few months. “The rate has dropped by 25 percent,” clinic doctor Salem Abu Khaizaran confirmed.

The clinic, which performs the $3,000 IVF procedure pro bono, is currently following up with seven pregnant women. Most recently, a prisoner’s wife from Tulkarem delivered twins early in December.

In addition to sharing hope for a better future, these women share the same fear: Israeli retribution. Lydia Rimawi would not reveal how Majd was “smuggled” out from prison, but she joked that getting him back to visit his father was much more complicated than getting him out. In August 2013, when Majd was two weeks old, she took him to Israel’s Nafha prison to introduce him to his father.

“They asked me whose baby he was,” Lydia Rimawi told Al Jazeera. “Guards snapped, said my husband has been in jail for 12 years, there’s no way that baby was his.”

To be allowed in, Israeli authorities asked for a DNA test – something Majd’s mother and father both rejected, fearing Israeli authorities would manipulate the results to smear their reputation and that of other couples who resorted to sperm smuggling. Instead, Abdul Karim Rimawi admitted to smuggling out a sperm sample. His punishment was a $1,500 fine and a ban on visits for eight months, followed by a separate ban pertaining to his wife and son.

“There’s no logic in banning a baby from visiting his father; what kind of a threat would a child pose?” Abir Bakr, a human rights lawyer representing the Rimawis, told Al Jazeera. “It’s a vindictive measure.”

This type of repercussion is precisely the reason why most Palestinian women opt not to visit their imprisoned husbands with children conceived this way. One prisoner’s wife with a six-month-old baby told Al Jazeera that her husband was banned from having visits for 12 years. The woman, who did not want her name published, said she did not want to give the Israelis any reason to impose another ban.

Another prisoner’s wife who delivered twins last year said she had also been banned from visiting with her husband for the past 12 years.

“I don’t want to send the babies with relatives,” she told Al Jazeera. “Not after what happened with Lydia.”

The Rimawis’ lawyer ultimately took the case to court and their appeal was accepted, meaning Majd can finally meet the hero in his mother’s stories – his father.

Back in Beit Rima, northwest of Ramallah, Lydia Rimawi changed Majd’s clothes, preparing him for his first meeting with his father last month.

“I bought him a new grey outfit – it suits him, he’ll look like a little groom,” Lydia said a couple of days before the scheduled visit. Her excitement, however, did not hide her fear. “I don’t want to expect a lot. What if they didn’t let him in? I don’t want to be disappointed.”

Until the war on Gaza, she said, Abdul Karim Rimawi would see Majd on television during reports on weekly sit-ins for prisoners’ families. Recently, she sent him a picture of Majd and he could hardly recognise him. “That left me bitter; I couldn’t wait for the visit.”

Before sunrise on November 25, the Rimawis headed south to Naqab prison for the visit. After a three-hour drive and extensive security check, prison guards told Lydia neither she nor the child would be allowed in. “I lost my mind,” she said. “I didn’t expect to go in, but I thought Majd would.”

Lydia Rimawi called her lawyer, and 15 minutes later a soldier came back and said Majd could visit with his 14-year-old sister, Rand, but not with his mother. Describing their first meeting, Rand told Al Jazeera that her father’s eyes were filled with tears; he was over the moon. “Majd wouldn’t let go of dad for the 10 minutes he was allowed to see him.”

Lydia Rimawi noted: “Although I wanted to be there for their first hug, I thought to myself, that’s another victory.” Raising a family with her husband in prison has not been an easy task, she added, but she has no regrets. “I tried for another IVF when Majd was eight months; it didn’t work. I will try again.”