Soldiers Abduct A Palestinian And His Son In Hebron 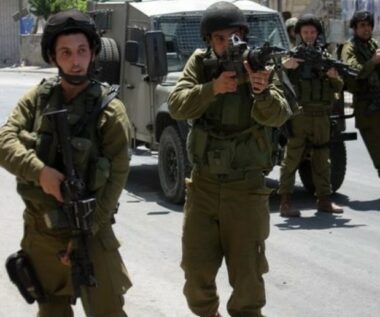 On Saturday evening, Israeli soldiers abducted a Palestinian man and his son in the at-Tabban village in Masafer Yatta, south of Hebron, in the southern part of the occupied West Bank.

He added that the soldier stormed and violently searched the family home and assaulted many Palestinians in the village.

Al-Amour also said the Israeli army has constantly been invading the small community, trying to demolish it and displace the families so that Israeli can build an illegal colony on the stolen and depopulated lands.

In addition, the army installed roadblocks on the main entrances of Sa’ir and Halhoul towns and the eastern entrance of Hebron city before stopping and searching dozens of cars.

In related news, the soldiers invaded Salem village, east of the northern West Bank city of Nablus, leading to protests, and caused seven Palestinians to suffer the effects of tear gas inhalation.