Another Wounded Palestinian In Serious Condition 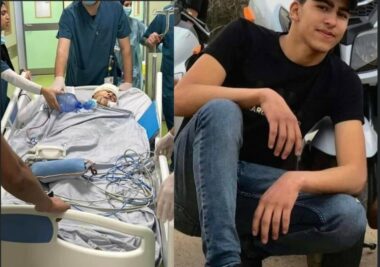 The Israeli occupation authorities have informed the family of Hamza Aabed, 19, from Jenin in the northern part of the West Bank, was transferred to the Rambam Medical Center, hooked to respiratory machines due to the seriousness of his wounds.

Hamza was shot by an Israeli army sharpshooter with a live round in the head, leading to Hemiplegia.

His family said a Palestinian ambulance was rushing the seriously wounded young man to a Palestinian medical center when the Israeli soldiers stopped the ambulance at the al-Jalama military roadblock and held it for three hours before the young man was moved to Rambam.

The Palestinian Prisoners Society (PPS) said the Israeli army continues its compounded and escalating crimes against the Palestinian people, adding that holding an ambulance transporting a seriously wounded person is yet another serious violation of basic humanitarian laws and International Law.

Aabed was among many Palestinians shot by Israeli soldiers during massive invasions of Jenin, Jenin refugee camp, and several surrounding areas.

One of the wounded Palestinians is Daoud Zobeidi, 40, the brother of Zakariyya, one of six detainees who escaped from the heavily fortified Gilboa prison and were captured a week later.

Daoud was shot and seriously injured by Israeli soldiers who invaded the Jenin refugee camp Friday.

On Saturday morning, medical sources reported that a young Palestinian man who was shot and seriously injured on April 22nd after Israeli soldiers stormed the courtyard of the Al-Aqsa Mosque in occupied Jerusalem died from his wounds.

The Palestinian, Walid Sharif, was seriously injured when the soldiers invaded Al-Aqsa on the third Friday of the Muslim holy month of Ramadan and assaulted hundreds of worshipers.