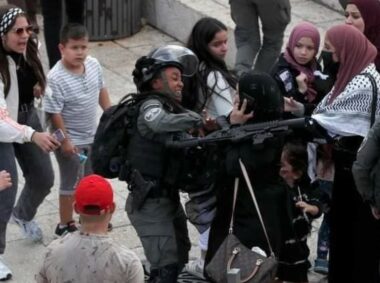 Israeli soldiers abducted, Wednesday, one Palestinian and assaulted many others for chanting against the provocative tour of a fanatic Member of Knesset and dozens of colonizers in Bab al-Amoud, one of the gates leading to the Al-Aqsa Mosque.

Eyewitnesses said dozens of soldiers and police officers accompanied Itamar Bin Gvir, a Member of Knesset and a leader of the fanatic Israeli far-right Otzma Yehudit party, along with dozens of colonizers in the proactive tour.

Many Palestinians started chanting and denouncing the tour, before the soldiers assaulted them, and abducted one.

It is worth mentioning that Israel has escalated its violations against the Palestinians in the Bab al-Amoud area, leading to many injuries and arrests.