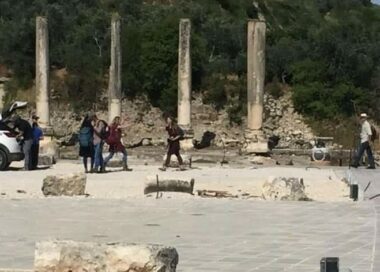 Israeli soldiers accompanied, Wednesday, dozens of illegal Israeli colonizers into the archaeological area in Sebaastia Palestinian town, north of Nablus, in the northern part of the occupied West Bank.

Mohammad Azem, the mayor of Sebastia, said the soldiers surrounded the entire area and prevented the Palestinians from entering it.

Azem added that the colonizers came in busses accompanied by many Israeli army jeeps, before touring the site and its surrounding area.

It is worth mentioning that the soldiers frequently invade Sebastia to accompany groups of colonialist settlers into the archeological area.

Israel is trying to claim the site is only part of its archeology, and constantly removes the Palestinian flag and its pole which extends 17 meters in the air in the al-Bayader area of the town.

It is worth mentioning that the illegal Israeli colony of Shave Shomron was also built on Palestinian lands that were annexed from Sebastia.

Area B (%21 of West Bank) is under Palestinian civil control, where the Palestinian Authority controls education, health, and the economy.