Soldiers Abduct A Palestinian, Attack Many, In Jerusalem 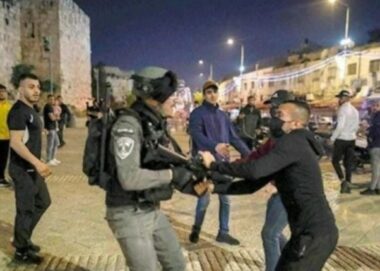 On Tuesday evening, Israeli soldiers abducted a young man and assaulted several Palestinians during a nonviolent march in solidarity with the Palestinian detainees, in Bab al-‘Amoud, in occupied Jerusalem.

Eyewitnesses said the soldiers attacked the nonviolent procession and chased many Palestinians, in addition to trying to prevent them from chanting in solidarity with the political prisoners in Israeli jails.

The soldiers also assaulted several Palestinians and examined the ID cards of many residents while interrogating them before abducting a young man.

The soldiers tried to remove Palestinian journalists from the area and investigated the ID cards of many of them, in addition to examining their ID cards and threatening to impose fines on them.

In related news, the soldiers abducted two children and injured dozens of Palestinians in Ya’bad town, southwest of Jenin, in the northern part of the occupied West Bank.

Also, the soldiers shot a young Palestinian man during a procession in Burqa village, northwest of Nablus, in the northern part of the occupied West Bank.