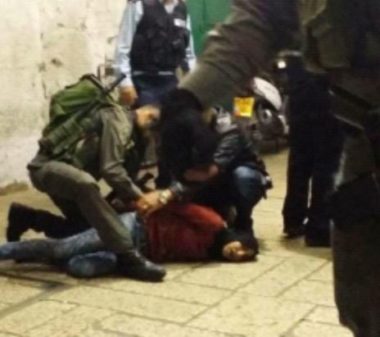 Eyewitnesses said the soldiers abducted two young men, identified as Mohammad Monther Atiya and Mohammad Ahmad Atiya, both from the al-‘Isawiya town, while they were leaving Al-Aqsa Mosque after performing prayers in the holy site.

The soldiers also invaded al-‘Isawiya, and fired a barrage of gas bombs at local youngsters, protesting the invasion, causing many to suffer the effects of teargas inhalation.

The invasion into the town mainly targeted the ath-Thaher neighborhood, and the soldiers assaulted several residents, in addition to breaking into homes and shops.

Also, Israeli soldiers, stationed at the al-Jeeb military roadblock, abducted two young men from Nabi Samuel village, northwest of Jerusalem, and took them to an interrogation facility in Atarot.

The abducted young men have been identified as Laith Barakat and Ahmad Barakat, local sources have confirmed.

The army also invaded the at-Tour town, in Jerusalem, and fired many gas bombs and concussion grenades, in addition to closing and isolating the al-Hardoub area.

It is worth mentioning that the village is completely surrounded and isolated from the rest of the West Bank, including Jerusalem, and only its inhabitants can enter it.

In Jenin, in northern West Bank, the soldiers abducted Rabea’ Wishahi, 30, after invading his home and ransacking it in Mothallath ash-Shuhada village, south of the city.

In related news, the soldiers attacked dozens of Palestinians holding a nonviolent protest against the colonialist activities in Beit Dajan village, east of the northern West Bank city of Nablus, and shot two in addition to causing dozens to suffer the effects of teargas inhalation.

In addition, the soldiers shot a Palestinian with a gas bomb in the head, and caused dozens to suffer the effects of teargas inhalation, after the army attacks dozens of residents on their lands, west of Salfit in central West Bank.

Earlier Friday, a Palestinian man, identified as Bilal Shehada Bawatna, 52, was killed, and two others were injured, Friday, after being rammed by an illegal Israeli colonist’s car, while participating in a nature walk activity in the Northern Plains of the occupied West Bank.