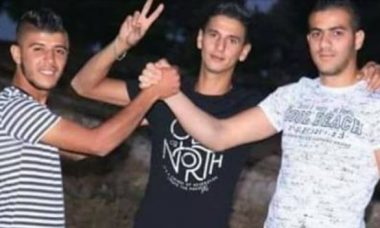 The Palestinian Prisoners Society has confirmed that Israeli soldiers have abducted, on Monday at dawn, seven Palestinians, after invading the searching their homes in the West Bank governorates of Jenin, Qalqilia, and Bethlehem.

The soldiers also invaded many neighborhoods in Jenin city, and installed roadblocks on several roads leading to Zabbouba village and Ya’bad town, before stopping and searching dozens of cars, and interrogated many Palestinians while inspecting their ID cards.

In Qalqilia, in northern West Bank, the PPS said that the soldiers abducted Ezzeddin Nofal, 18, and Tarbakan Mohammad, 24, from their homes.

The soldiers invaded and searched many homes in the city, and interrogated several Palestinians.

Also at dawn, the soldiers abducted nine Palestinians, including two children, after invading their homes and violently searching them, in Hebron, in the southern part of the occupied West Bank.