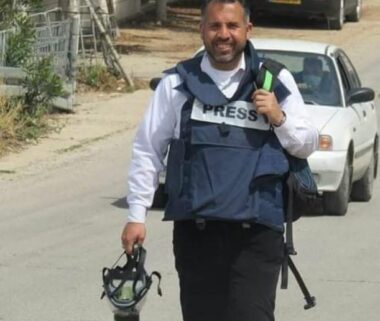 Israeli soldiers abducted, Wednesday, at least six Palestinians, including one journalist, from their homes in several parts of the occupied West Bank.

Media sources said soldiers abducted a journalist, identified as Ala’ Rimawi, 43, from his home in Beit Rima town, north of the central West Bank city of Ramallah.

Al-Rimawi is a veteran journalist and the director of J-Media, a Palestinian media organization that specializes in producing videos, photography, and live broadcasting services for Palestinian events.

The abducted journalist’s wife said her husband declared a hunger strike the moment the soldiers abducted him, protesting his detention and the constant Israeli violations against the reporters and the media outlets.

In occupied Jerusalem, the soldiers invaded and searched homes in the ar-Ram town, north of the city, and abducted three Palestinians. One of them is Khaled az-Zeer who while heading to a court hearing in Jerusalem, as an Israeli court is looking into appeals regarding the ongoing bulldozing of the Bab ar-Rahma graveyard for the benefit of Israel’s illegal colonialist activities.

In addition, the soldiers abducted two Palestinians from their homes in the Hebron governorate, in the southern part of the occupied West Bank.

Media sources in Hebron said the soldiers abducted a former political prisoner, identified as Nidal Omran Qawasmi, after storming and ransacking his home in the city.

They added that the soldiers also invaded Yatta town, south of Hebron, and broke into several homes before abducting Mohammad Ali Jabour.

The army frequently invades Palestinian communities, homes, and structures across the occupied West Bank, and abducts Palestinians on a daily basis.