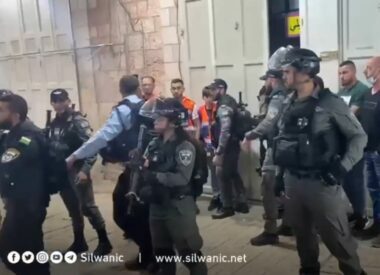 Israeli soldiers abducted, on Wednesday evening, at least five Palestinians, including one child, after the army and the police assaulted dozens of Palestinians in Bab al-‘Amoud area, in occupied Jerusalem.

The Wadi Hilweh Information Center in Silwan (Silwanic) said the soldiers, and police officers, resorted to the excessive use of force against the Palestinians after leaving the Al-Aqsa Mosque, following evening prayers.

It added that the Israeli police fired gas bombs and concussion grenades, in addition to spraying the Palestinians with wastewater mixed with chemicals.

Silwanic stated that dozens of soldiers and police officers were deployed in Bab al-‘Amoud, and all surrounding streets and alleys to force the Palestinians away, and assaulted dozens of them, before abducting five.

One of the abducted Palestinians is a child, identified as Yazan al-Balbeesi, 12, who was taken to a nearby military post. The soldiers also chased scores of Palestinians in the area and various alleys of the Old City.

It is worth mentioning that, while the soldiers and the police were assaulting the Palestinians and removing them from the courtyards of Al-Aqsa Mosque and surrounding areas, they allowed dozens of illegal colonialist settlers to conduct provocative tours in the courtyards of the holy site.

On Tuesday at dawn, the soldiers abducted five Palestinians from their homes in the Old City and the at-Tour town, in the occupied Palestinian capital, Jerusalem.

On Monday, Israeli intelligence officers handed Sheikh Ekrima Sabri, the Khatib of the al-Aqsa Mosque in the occupied Palestinian capital Jerusalem, an order barring him from traveling for four months.